On April 23, collectors will have a chance to eye some sailing instruments, globes, half-hulls and boat models, engraved sperm whale teeth and paintings by Marin-Marie (1901-1987), whose work was championed by the expert, Bruno Petitcollot. 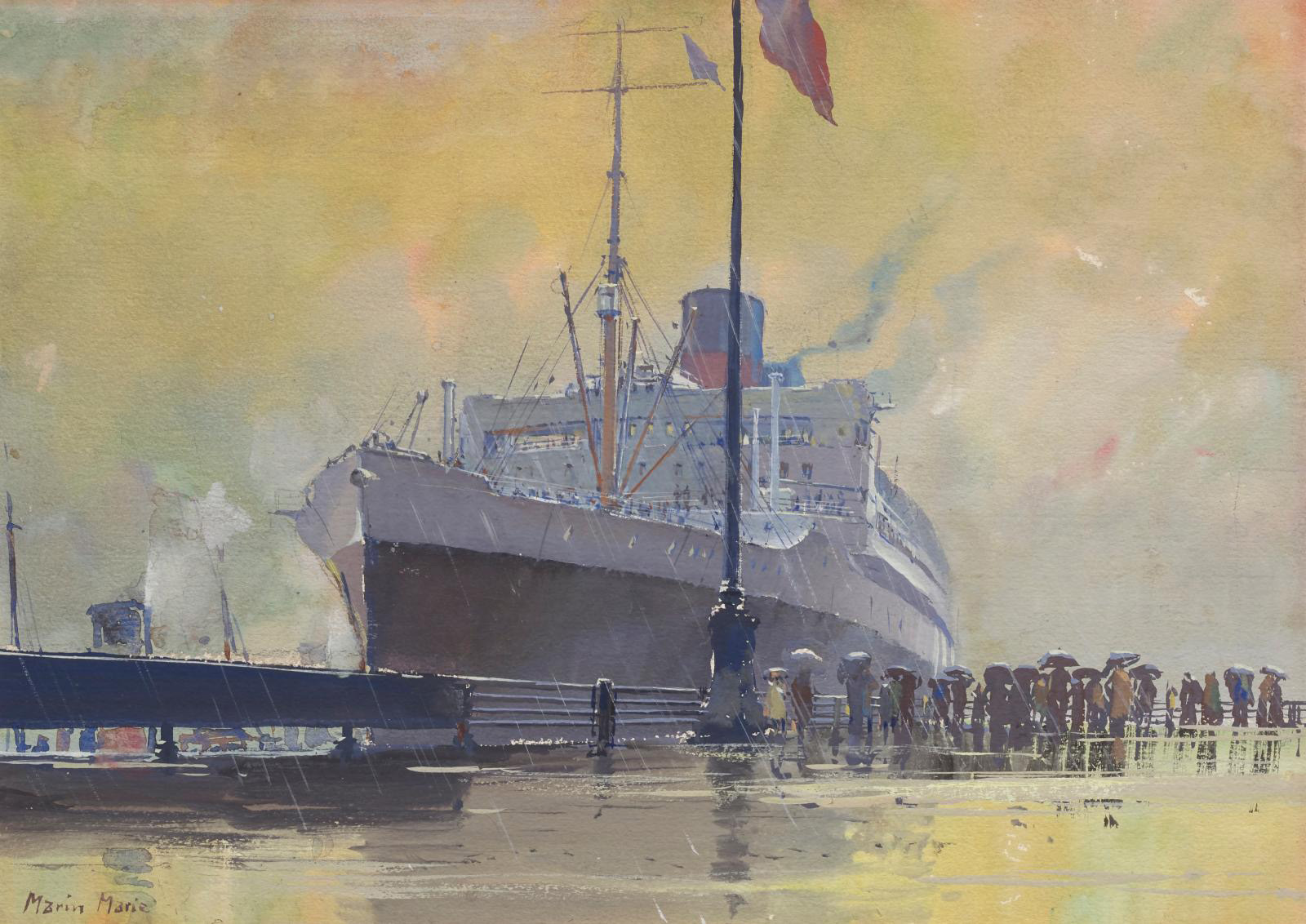 With his heavy stubble, tanned complexion, husky voice, and relaxed gait, Bruno Petitcollot hardly fit the image of the expert you expect to meet at the Hôtel Drouot. This seeming old sea dog was eminently friendly, and you just had to see him on a restaurant patio in the neighborhood to understand how he truly relished life. A few days before his death on October 30 at the age of 72, he was sharing lobster, oysters and shrimp with his brother. It is often said that law studies set you up for anything; his own led him to the care of disabled children in the Paris region. Then chance intervenes, sometimes provoked as much as imposed. "The trade just grabbed us, as it did our father, who a few years before he retired realized what he had always wanted to do, and opened a store selling marine objects in Rue de Seine," says Jean-Yves Petitcollot, Bruno's younger sibling. Seeing how fascinating the business could be, the two brothers launched into it in turn.

While the marine world was not really a calling, they could not imagine selling anything else. Following their father's example, they bought merchandise in England and sold it in the store they opened not far from his. Then they dropped anchor at the corner of the Rue de Beaune and Rue de Verneuil in Paris. These were happy times for the brothers, who met one Olivier de Kersauson [a French sailor and writer—Ed.], and had the "wild luck" of participating in a Biennale des Antiquaires and the Cinq Jours de l'Objet Extraordinaire (a fair covering unusual objects from every period) at the Carré Rive Gauche, and attending several shows. Every day, they would visit the Hôtel Drouot, which had moved into the former Orsay station (now the Musée d'Orsay). However, each had his own specific skills: Jean-Yves bought objects and restored them; Bruno ran the store and provided the expertise. Again, things fell into place naturally. "I was a handyman, whereas he really wasn't; I knew how to buy, whereas he often yielded to instant passions," says Jean-Yves.

A Life Focused on the Sea
Without making a fortune, they earned a decent living. It was as if work and vacationing were one and the same. A few years later, they parted company, but remained close, each keeping to his specialty. In his store in the 14th arrondissement, Bruno Petitcollot continued to assess marine and scientific objects, enriched his website la rose-des-vents.com—which is still active—and never missed an exhibition at the Musée de la Marine, Place du Trocadéro, of course, or the Musée du Long Cours Cap-Hornier in Saint-Malo, for which he had a particular fondness. At auctions, in Paris or in the countryside, he didn't merely assist the auctioneer; he also talked about the objects with the ease of a storyteller. His other pleasures included "a glass of white wine, a cigar and watching the sun go down over the port of Marseilles," says his younger brother. He also liked tossing a few lobster traps from his fishing boat off Embiers island in the Var, and sailing with Bernard Rubinstein, a figure in the nautical press, who died on June 13 at 74. This all brought back Bruno's childhood memories of vacations in Carnac, Bréhat and Arcachon, along the western coast of France.

Though he did not paint, this expert handled a pencil well. Maybe this underlay his passion for the work of the artist Marin-Marie. Both men studied law, and came from families that had no connection with the nautical world, but took up summer quarters by the sea—the Petitcollots in Brittany, the Durand Couppel de Saint-Fronts in Chausey. It was on this island, a few miles from Granville, that young Marin-Marie became a true connoisseur of the sea world over the years. At the age of 5, he strode the deck of the Holiday; in 1925, he had his second meaningful nautical experience when he joined Commander Charcot's Pourquoi-Pas? Eight years later, he achieved his most famous feat: crossing the Atlantic in 28 days aboard the cutter Winibelle: a prelude to his other solo voyage to America, this time in a motorboat. Mobilized onboard Le Strasbourg, he took part in the battle of Mers-el-Kebir, returned to service on the Fantasque and was in Dakar during the attempted Anglo-Gaullist landing in September 1940.

However, Marin-Marie is best known to the general public as an artist. A draftsman before becoming a painter, he depicted the sea and boats with impressive precision, with a keen eye and deft hand. Under his brush, the waves seem truly in motion and the viewer feels like a passenger. The swelling sails, the movement of the boats and the marbled seas all reflect not only reality but also a strong sense of power and freedom. It's easy to see how his work spoke to Bruno Petitcollot, who from the early 2000s devoted himself with his family to promoting Marin-Marie's work. On October 29, 2007, at Drouot (Deburaux & Associés), a large coastal fishing scene, Cancale, la caravane (Cancale, the Caravane), inspired bidding up to €261,268. The record still stands. On April 23, a dozen watercolors—and as many framed pieces—will be leaving the Petitcollot collection. The selection includes the last great sailing ship lords (for whom he had a particular affection), the arrival of the oceanliner Ile-de-France in the port of New York, the metallic mass of a warship during the bombing of Dakar, and three-masted ships on seas brushed in shades of white, gray and blue. They will be accompanied by beach mementos, scientific objects, engraved sperm whale teeth, terrestrial and celestial globes. Time to get on board!

Exquisite Automatons and Treasures of Science