Last November 30th, The Virgin and Child Enthroned by the Master of Vyšší Brod was knocked down for €6.2 M to the Filippo Benappi Gallery, working on behalf of the Metropolitan Museum of Art, which had moved into action to give this painting its due honour. 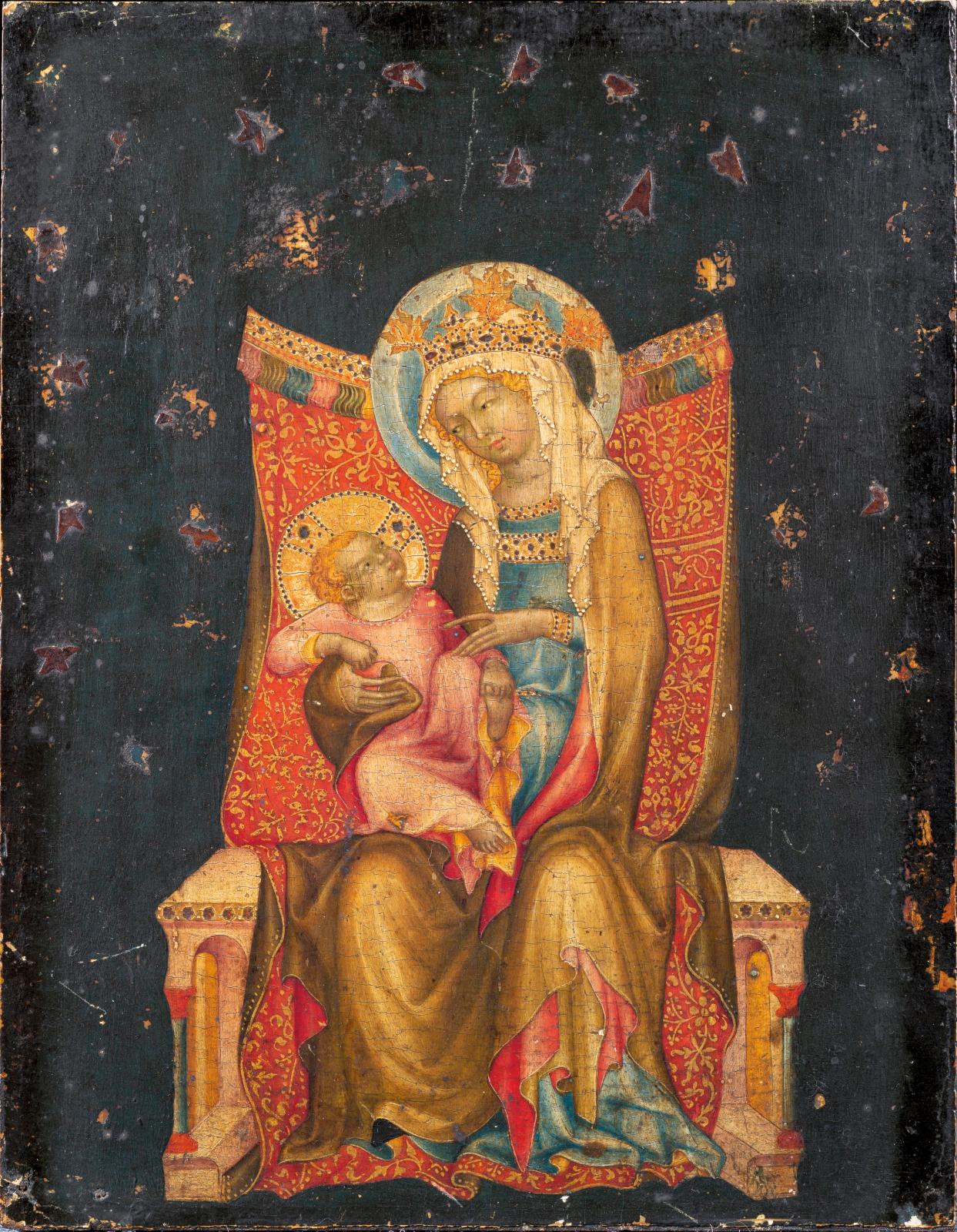 Until a few years ago, the Master of Vyšší Brod was a name known solely to a small circle. Only a few initiates knew about the nine panels of the Cistercian altarpiece commissioned by Charles IV of Bohemia's Grand Chamberlain, Petr Rozmberk, housed in Prague's National Gallery in the Convent of St. Agnes (only four of the panels are ascribed to him), or of the few works attributed to him, like the Madonna of Kladsko (now in Berlin's Dahlem Staatliche Museum). Then came the Metropolitan Museum of Art's 2005-2006 exhibition, "Prague, The Crown of Bohemia, 1347-1437": a first that caused a decided shock wave. Since the Velvet Revolution of 1989, Prague has become one of Europe's most popular destinations. Though its cultural patrimony is now accessible and well-known, only a few art lovers, apart from a string of specialists, were aware of finding there the artistic counterpart of Avignon, the City of the Popes. The godson of France's Charles IV (Charles the Fair) at whose court he studied for nearly seven years (in part with the future Pope Clement VI), and the husband of Blanche de Valois, Charles IV, King of Bohemia from 1346, became Holy Roman Emperor in 1355. During his reign he transformed Prague into a cosmopolitan city where French, Italian and Scandinavian artists were welcomed with open arms. As in Avignon, the interactions were exciting. Yet the identity of these artists remains uncertain. While the King's First Painter, the Master of the Luxembourg Genealogy, seems to have been Nicholas Wurmser from Strasbourg, and Master Theodoric may have been from Cologne, little is known about Master Oswald and the Master of the Třeboň Altarpiece, and even less about the Master of Vyšší Brod. The elegance of his meticulous craftsmanship – that of the miniaturists – and his intimate knowledge of the Italian feeling for volume and colour are breathtaking.

Filippo Benappi's first "win"...
After the Metropolitan Museum of Art's exhibition, however, the market found it difficult to follow, since these works are extremely rare, if not impossible to find. The great-grandson, grandson and son of Piedmont dealers, Filippo Benappi, then aged 25, exhibited at the TEFAF in Maastricht for the first time in 2012, with support from Sasha Mehringer. He attracted attention with a gold background painting (long exhibited at the Alte Pinakothek and recently restored to a Jewish family), which he had just bought, shored up by total conviction, in which Andrea de Marchi recognised the hand of Franceschini Zavattari. The work was then sold to the Alana collection. Hoping to do equally well the following year, Benappi exhibited one of the paintings his father had left him in the family gallery's stock: a small Bohemian panel depicting Saint Procopius and Saint Adalbert. When it went on sale in London in the early 1990s, the Swiss dealers who had bought it thought it was by a fifteenth-century French artist. Alarmed to discover that it was a painting from Prague, and not highly regarded at that, they sold it to Ezio Benappi for very little. Two decades later, Filippo Benappi offered it for $2.8 million in Maastricht, without arousing much interest. He then sold it for $2.2 million to the Metropolitan Museum of Art, which had exhibited it in 2005 as an anonymous work, yet indicating that Olga Pujamnova, Andrea De Marchi and Gaudenz Freuler thought it could be a work by the Master of Vyšší Brod. Benappi was now playing in the major league. Since then, he has sold a Christ at the Column by Johann Baptist Hagenauer and Stefano da Verona's Crucifixion to the museum on Fifth Avenue, and built up a relationship of trust with Keith Christiansen. He often bids on behalf of the Metropolitan – and incidentally, he was the one who landed the final bid of €1,025,000 for a French School painting of c.1400-1410: a Franciscan monk praying to the Virgin and Child Jesus presented by Saint Louis of Toulouse with the De Baecque auction house on November 12, 2018 in Lyon, finally preempted by the Louvre.

As rare as Cimabue
So it was quite natural that the Filippo Benappi gallery should be bidding in Dijon on November 30th. Discreetly, Benappi sent Amel Khiter along, who, in the saleroom, battled up to €4.4 M against Saint-Honoré Art Consulting and two Czech bidders –at least one of whom was working for the National Gallery. There were also five other potential buyers on the phone, including the final underbidder, who spoke with Stéphane Pinta. Acquired for €6.2 M, The Virgin and Child Enthroned thus catapulted the Master of Vyssi Brod into art market history. Among Éric Turquin's recent great discoveries, it is certainly less dramatic than Cimabue's Christ Mocked, but a far more impressive than Artemisia Gentileschi's Lucretia. Filippo Benappi may be dreaming of a follow-up success, but the fact remains that these corpuses are extremely small. No works by Nicholas Wurmser, Master Theodoric or the Master of the Třeboň Altarpiece have ever gone to auction – at least under these names; and the painting in Dijon was the first by the Master of Vyšší Brod ever to appear in a public sale. The real lesson at Dijon was not the price achieved by one of the three artists of this "Holy Trinity" or the fact that the museums of Prague and New York were involved, but the number of potential buyers. The chances are that in the coming months, the Bohemian Primitives, whether or not anonymous, will be attracting top dollar. Fifteen years after the 2005 exhibition, things have come full circle for the Metropolitan Museum of Art.