This spring, Emmanuel Perrotin will open his ninth space in the heart of Paris’s Golden Triangle focusing on the purchase and resale of works on the secondary market. Contemporary art galleries are increasingly taking on this double role. 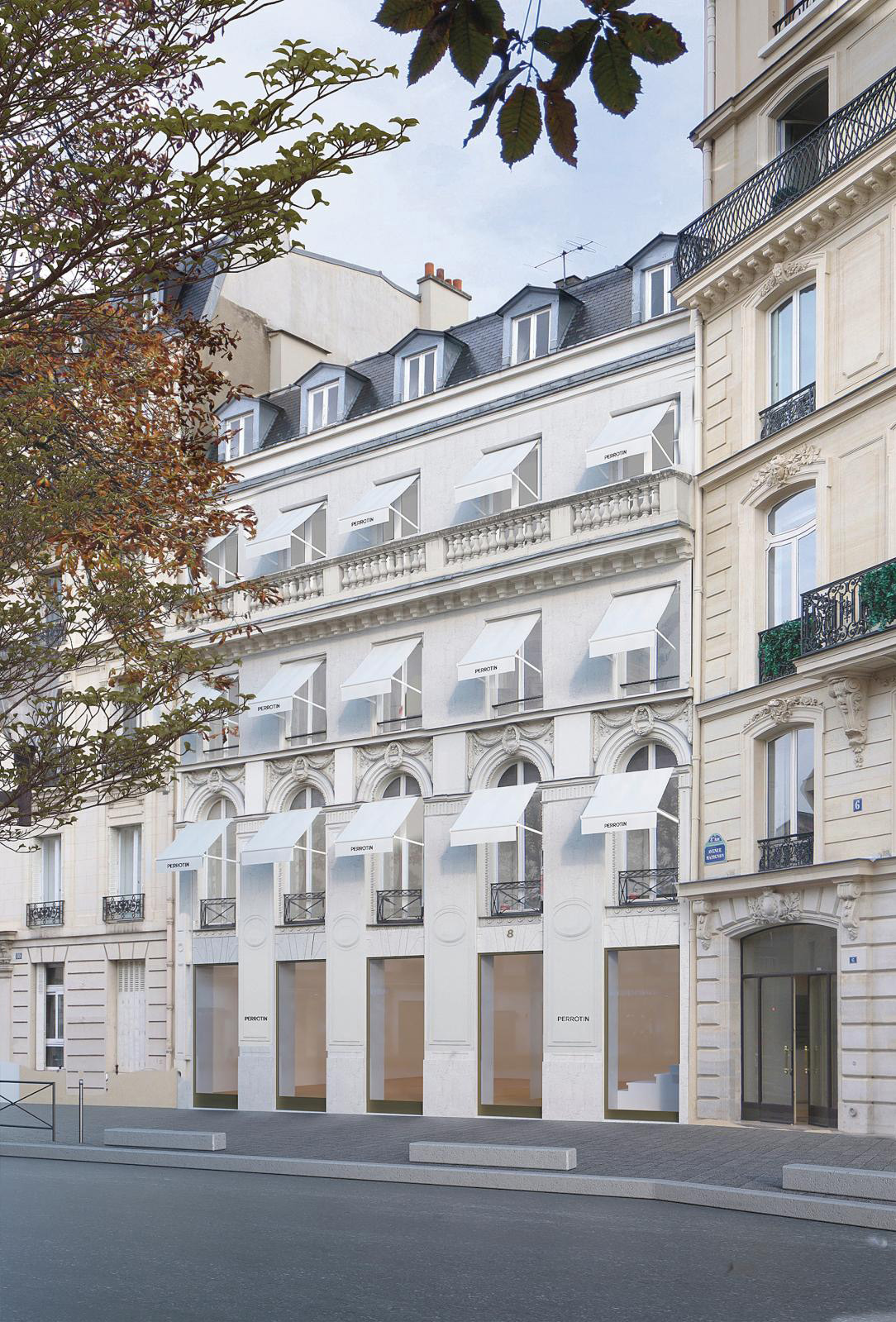 Emmanuel Perrotin’s private mansion at 8 Avenue Matignon, which will be devoted to the secondary market.
Photo: L’Atelier Senzu

Emmanuel Perrotin’s private mansion at 8 Avenue Matignon, which will be devoted to the secondary market.
Photo: L’Atelier Senzu

True to form, and despite the context, Mr. Perrotin thinks big. His new gallery will be in a private mansion in Avenue Matignon in the city’s most stylish district. "I was already quietly working in the secondary market," he says, "because the clients who sell or buy through it are looking for discretion. But for a while, I’ve wanted to get more involved." When this prestigious residence became available, Mr. Perrotin jumped at the chance and teamed up with dealer Tom-David Bastok and Dylan Lessel, former head of the Kamel Mennour gallery, with whom he has worked for several years. He is not the only one in the business to officially wear two hats. Parisian Magda Danysz, known for promoting street art, recently announced the creation of a department devoted to the secondary market within her gallery. "Around 20 years ago," she jokes, "a leading Parisian dealer predicted I’d do it one day. In the midst of the contemporary art craze, I found the prospect incongruous!" The idea, however, seems more topical than ever.

"Is it due to a real shift in practices or the end of a taboo?" asks Nathalie Moureau in a recent survey carried out with the CPGA (Professional Committee of Art Galleries in France). This small world is traditionally divided into two categories. The larger section, attached to the "primary market", consists of gallery owners who promote the artists they represent. The others buy and resell works, developing one or more specialties, which puts them in the "secondary market". This is the case with Benoît Sapiro, CPGA vice-president and head of the Minotaure gallery, which focuses on the Paris School and the avant-garde of Central and Eastern Europe, and Franck Prazan, specializing in the Second Paris School. As he says, “I buy from all sources except the artists—from families, collectors, colleagues or auction houses—always following the same principle: selecting the best of the best.” Actually, even if the professions differ, the boundaries are now decidedly blurred. The shift occurred during the 2000s when both activities were combined.

Secondary Market: A Second Engine
"Following a slew of crises," says Mr. Sapiro, "some primary market galleries have opened up to the secondary market to diversify their risks. They have seen the advantage of having a second engine capable of supporting them when the going gets tough”—and for good reason. The artists on the second market—often dead and sometimes enshrined in history—are steadier values than their contemporary counterparts, especially stars whose price indexes fluctuate, particularly in periods of uncertainty, prompting collectors to be wary.

The figures confirm the trend. In 2001, 78% of gallery owners questioned in a survey conducted for the French Ministry of Culture said they only worked in the primary market. Since then, the situation has changed. According to the CPGA report, 32% of its members operate only in the primary market and 7% only in the secondary, while 61% say they are active in both, albeit to very different degrees, including the smallest. The growth of the two-pronged approach also stems from "the increasing management of estates," says Nathalie Moureau, even though that partly falls within the primary market, where it is a matter of promoting an artwork over the years in agreement with the rightful owners. One thing is certain: the galleries’ positioning influences their results, as the report shows. Almost half the galleries operating exclusively in the primary market post under €500,000 in sales; conversely, 70% of those combining both activities exceed €3 M.

Estates and Networks
The mix of genres will undoubtedly increase, probably accelerated by the crisis—up to a certain point. "To keep its image up," says Mr. Sapiro, "a contemporary art gallery must have its own stars, and embarking on this adventure requires careful planning.” Gallerists must know how to find works, verify their provenance and authenticity, make estimates and have the right networks. That is why the most powerful galleries, such as Gagosian and Hauser & Wirth, are the first to capture the clientele likely to buy major pieces.

From there, each gallery builds its own strategy. Georges-Philippe Vallois entered the secondary market for reasons of personal taste when he started out in Saint-Germain-des-Prés around 30 years ago. His program included Alain Bublex and Gilles Barbier—the rising stars of the moment—and the New Realists Arman and César, whose credibility he largely helped to establish. Then he expanded his scope to include the estates of Niki de Saint Phalle and Jean Tinguely. Almine Rech, who moved to a new place in Avenue Matignon in January, says the commitment dates back to the early 2000s. “In addition to the Wesselman, Förg and Appel estates," says senior director Martin Bremond, "we work in the secondary market with all the gallery's artists, like Peter Saul, George Condo, Alex Israel and Claire Tabouret, and, depending on the opportunities, with outside artists, which allows us to hold group shows with historical pieces from private collections.” Ms. Danysz says, "This activity is actually a logical extension of our task in terms of support. Knowing our areas of expertise, collectors naturally turn to us." This is how the process began for her in 2008-2009: "Customers were looking for Shepard Fairey's works and I knew where to find them since I had sold some a few years earlier and was exhibiting the artist. Now I'm also being approached for video and Chinese art, my other areas of expertise. Requests, many of which come from our Shanghai and London branches, have quadrupled in the last two years. That’s why I decided to structure the gallery.”

Emmanuel Perrotin’s Ambitions
With locations in six countries, six estates under management and a stable of 50 visual artists, Emmanuel Perrotin is obviously going the furthest of all. The Avenue Matignon premises will lend themselves perfectly to his new ambitions. The first floor, to be used for exhibitions, will be open to the public. The hushed upper-floor rooms will be reserved for private hangs and sales. The goals are worthy of the venue: "To open the spectrum to artists other than those represented by the gallery in contemporary and modern art. Calder, Jasper Johns, Fontana and Basquiat, and possibly Picasso and Giacometti, will probably join the regulars, Murakami, Cattelan and Othoniel.” Now there's a challenge, especially in these troubled times. But as ever, Mr. Perrotin is totally fearless.