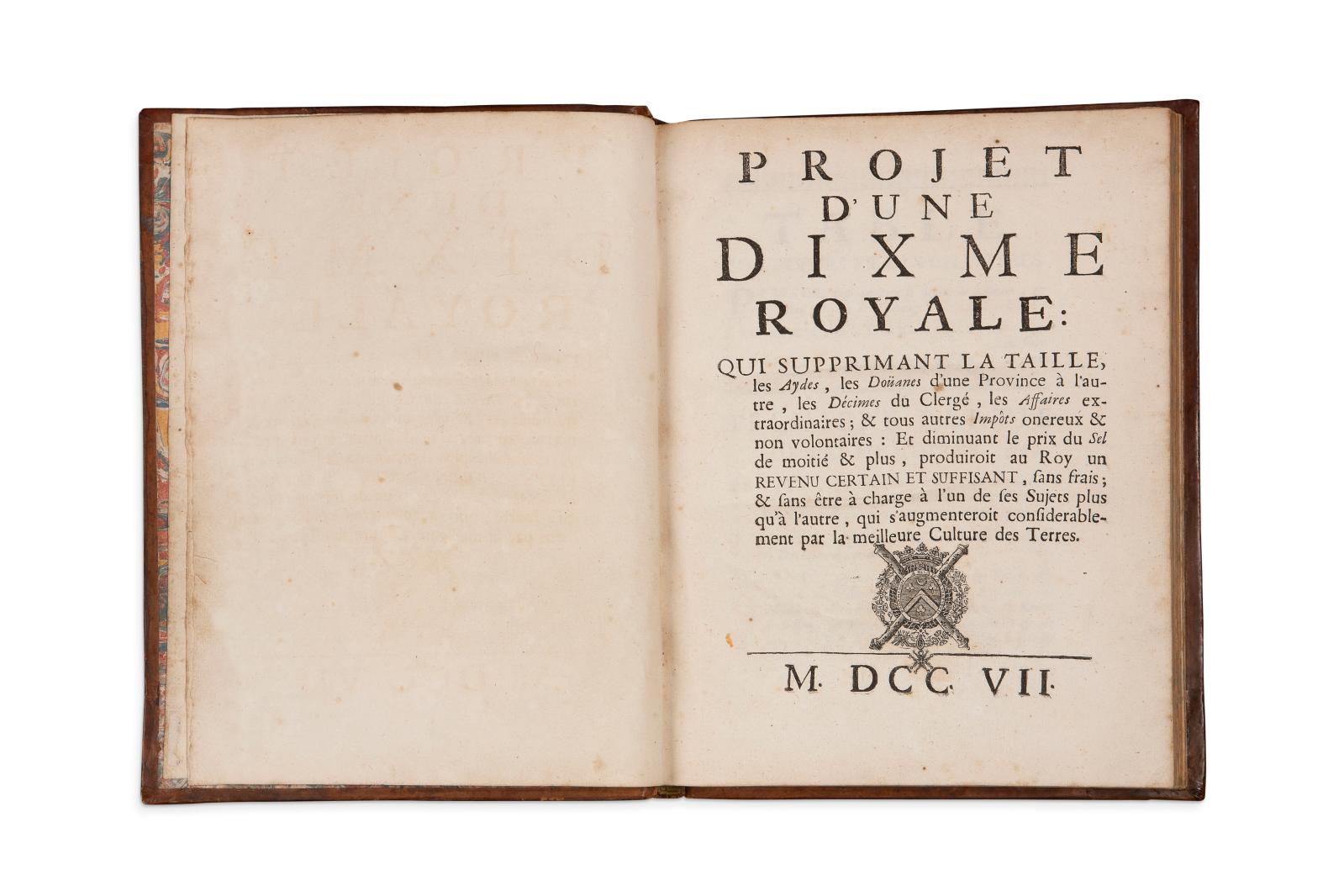 The third auction of the collections of the defunct company Aristophil resumes in mid-November with 770 lots. The low-end estimate surpasses €6.3 M. Like the previous sale, this one has been put into the hands of Ader-Nordmann, Artcurial, Drouot-Estimations and Aguttes, whose auctioneer is orchestrating the dispersion, which has taken six years.

Precious works
On 14 November, Aguttes’ hammer blow starts the week with a session focusing on antiquarian books. Taxpayers will be delighted to see the maréchal de Vauban’s plea to establish an income tax. The "project for a royal tax" on “everything that yields an income” could have provided the king with “a steady stream of sufficient revenue”, according to the author, who wisely refrained from publicly signing this radical proposal implying the abolition of privileges because it affected all classes. Some 300 unauthorised copies were printed in Rouen. On 14 February 1707, it was banned by the king’s council and doomed to destruction. The author annotated this copy (€180,000/200,000), one of the few to have survived, several weeks before his death. The second part of the sale, devoted to manuscripts and autograph letters, features an epistolary exchange between Jean-Jacques Rousseau and his protector Madame d’Epinay (€200,000/250,000) as well as a 240-page notebook in the philosopher’s handwriting, part III of his “personal copy" of "Julie ou La Nouvelle Héloïse". It had been missing since the 1936 Drouot auction of the eminent academician Louis Barthou’s library (parts IV to VI are in the library of the National Assembly in Paris). Appraiser Thierry Bodin counted 900 corrections and modifications that were nearly unknown before the document resurfaced at Aristophil (€400,000/500,000). Eighteen of Madame de Staël’s notebooks contain her first draft of "Considérations sur les principaux évènements de la Révolution française", published in 1818 after her son finished it (€300,000/400,000). Ader Nordmann takes over for the modern literature sale (15 November), whose first part focuses on illustrated books. A leather, mother-of-pearl, lacquer and eggshell Art Deco binding by Pierre Legrain graces an edition of Huysmans’ "À Rebours" illustrated with 220 colour engravings by Auguste Lepère (€50,000/60,000). Part two, devoted to autographs, contains "Mémoires d’un fou" (1838), Gustave Flaubert’s story about his first adolescent passions in Trouville 30 years before "L’Éducation sentimentale" (€300,000/400,000). It also includes Gide’s full finished manuscript of "Caves du Vatican" (€100,000/150,000), owned by his daughter Catherine, and two notebooks written by Victor Hugo in 1872 during his stay on Guernsey (€40,000/50,000).

From Brel to Marie Curie
Drouot Estimations will conduct the week’s most original sale on 16 November. Devoted to film, theatre and French chanson, it includes the 1937 first draft of the script for "Quai des brumes", which Prévert adapted from Pierre Mac Orlan’s novel (€100,000/150,000), and Hitchcock’s 130-page storyboard for his 1950 movie "Stage Fright" starring Marlene Dietrich. This collection of 340 lead pencil drawings (€50,000/60,000) perfectly illustrates the method used by the director, who sketched each shot from an angle that was later faithfully filmed with the camera. Another 95 pages contain Orson Welles’ frightening drawings for "The Trial" (€20,000/30,000). On a lighter note are the manuscript of Boris Vian’s "En avant la zizique… et par ici les gros sous" (€30,000/40,000), the steamy lyrics of Gainsbourg’s "Je t’aime, moi non plus" (€15,000/20,000) and a notebook in which Jacques Brel wrote his song "Amsterdam" (€40,000 to 50,000). The last sale (19 November) will take a more serious turn, focusing on science. Observers will closely follow the results of the Artcurial auction of Émilie du Châtelet’s voluminous preparatory work for her translation of Newton’s "Principia" (€150,000/250,000), which Voltaire had published after her death under the title "Exposition abrégée du système du monde". This archive was the highlight of a Christie’s auction of the marquise and philosopher’s documents in London in 2012, when it fetched €960,000. Aristophil had bought five of the 10 most expensive lots. Researchers were so excited about this dispersion of partly unknown texts that the BnF asked for them to be digitised. Einstein’s thoughts on his quest for the unifying principles of physics have never appeared at auction before (€50,000/70,000). The first geometry book in French, written by Charles de Bovelles and published in 1511, is estimated at €30,000 to 50,000. There are only four known copies in the world. Claude Aguttes will orchestrate the last session, which includes the second typewritten part of Marie Curie’s "Traité de radioactivité", considered her scientific testament (€180,000/250,000). This week of sales will end with 28 letters by Pierre Curie, a telegram from Pasteur and notes written by Egyptologists.

Print the article
News feed
See all news
Paris Photo launches its New-York edition
First Donald Judd's US retrospective in over 30 years
Tefaf Museum Restoration Fund's grant goes to the V&A and LACMA
Resignation of the Uffizi's scientific committee
Not to be missed
Pre-sale
Robert Beauvillain: the love of illustrated books
A chance to savour the exquisite Hours, early printed works and…
Pre-sale
A radiant bull
The clearly-identifiable creature, accompanied by symbols, expresses…
Pre-sale
Watch out for these!
A Parisian collector assembled this set of thirteen timepieces over…
Pre-sale
Back to nature
Combining spontaneity and sophistication, this work by Léonard Foujita…