André-François Petit: a Passion for Surrealism

The Stéphane Petit estate sale boasts precious Surrealist works passed down from his father, providing an opportunity to pay tribute to a discrete dealer who had an amazing career and started upholding the movement in the 1950s. 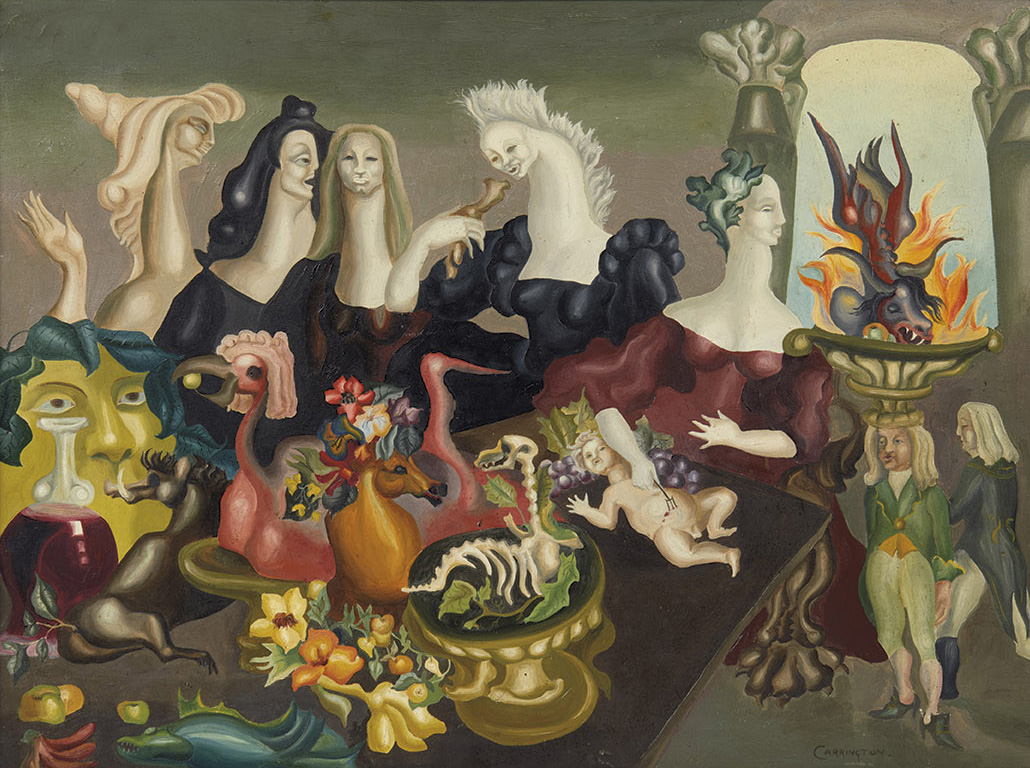 The apple does not fall far from the tree. Gallerist André-François Petit’s son was a collector. Stéphane Petit lived surrounded, if not invaded, by sculptures, works on paper and paintings hanging up to the ceiling in his modernist apartment in Neuilly. The inventory after his untimely death revealed many treasures, from two masterful paintings by Leonora Carrington to drawings by Bellmer, Brauner, Dalí and Tanguy that he inherited from his father, André-François Petit, one of the foremost Surrealist art dealers. What foresight!

An Itinerary
The son of Auvergnat bougnats—coal merchants who also ran a small cafe—André-François Petit was born 1924 at Felletin in the Creuse. He studied law to please his father. “As soon as I graduate,” he told himself, “I’ll live my life!” He kept his word. In the 1950s he started the Carpentier-Petit Gallery at 122 boulevard Haussmann in Paris. “Never have a partner,” he advised his daughter Bénédicte. “There’s always one who works and the other who sleeps.” He and Carpentier parted ways. Abstract art was all the rage at the time. Petit represented Lagrange and Lapicque, but abstraction bored him. His passion was Surrealism: the subconscious mind, irrationality, dreams, eroticism, etc. In 1961 his two-room gallery exhibited Bellmer’s weird drawings and dreamlike landscapes by his favorite painter, Tanguy. A year later, a tiny black and white catalog featured paintings by Brauner, Delvaux and Magritte as well as drawings by Dalí. Some came from the collection of poet Joë Bousquet. “There’s a story that when Bousquet died, Petit rushed to Carcassonne to try and buy up his paintings,” recalls Marcel Fleiss, a long-standing competitor whose Galerie 1900-2000 features the Dada and Surrealist movements. A tall tale? Well, it takes one to know one. In any case, Surrealism had fallen out of fashion by then. Marie-Laure and Charles de Noailles, aficionados from the start, often popped in at the gallery. But Petit shunned the social spotlight. “He was low-key, quiet, modest and disliked talking about himself,” says Rodica Aldoux, his assistant for over two decades. “He would’ve hated the fact that this article is being written about him.” Too bad. Smartly dressed, polite and honest, he inspired trust. Dalí often hosted him in Port Lligat, Spain and his suite at the Hotel Meurice in Paris. During a 1967 “tribute to Meissonier” at the Meurice, Dalí signed a poster for him with the telling dedication “Pour Petit, le précurseur dalinien” (“For Petit, the Dalinian precursor”).

Petit also backed younger Surrealist painters, including Dado before he changed styles and left him for the Isy Brachot Gallery, the Romanian Perahim, Carlos Revilla, a Peruvian who did not get very far, and Paul Wunderlich, who made erotic compositions. Shows of their works alternated with memorable retrospectives, such as the 1975 de Chirico exhibition. Ms. Aldoux still recalls radio journalist Michel Lancelot trying to interview the tight-lipped painter, who had a mocking sense of humor. “Surrealism?” the artist grumbled. “I don’t know what that is!” The poor Lancelot could not pry one word out of him about his break with the Surrealists. “André-François Petit was a likable man,” says colleague Daniel Malingue. “He had round cheeks, a smile at the corner of his mouth and a gift for connecting with artists’ families that I never did.” He was apparently close to Cécile Eluard, Paul and Gala’s only daughter. When Max Ernst arrived in France in the 1920s, her parents hosted him at their home in Eaubonne, near Paris, where he had fun painting on the walls.  The Petit gallery transferred the murals to canvas in 1967 and exhibited them two years later. At that time, Petit swapped a door painted by Ernst for his former schoolmate Daniel Filipacchi’s duplex apartment in Megève. A paparazzo for Paris Match magazine, which he eventually owned, Filipacchi started Lui and founded a press empire. A bibliophile, he loved Surrealist poetry: Breton, Eluard and especially Aragon. Petit introduced him to painting: Wolfgang Paalen, Dorothea Tanning, Toyen, Oscar Dominguez and others. Together they were briefly interested in the American Hyperrealists. In 1976 Petit moved to the Left Bank, where he took over Alexandre Iolas’s gallery at 196 boulevard Saint-Germain. By then he was the go-to expert. Not an exhibition on Surrealism took place at a museum in London, New York or Tokyo without his being asked for loans. He was consulted to date or authenticate a Dalí, an Ernst or a Tanguy. The temperamental Bellmer gave him permission in writing to certify his works, a task he graciously carried out and passed on to Ms. Aldoux. Petit’s opinion was uncontested when he participated in the crusade against Picabia’s fake mechanical drawings.

Masterpieces
The gallerist was actually more a collector than a dealer. Bénédicte, his eldest daughter, recalls being scolded for her poor grades beneath Magritte’s painting Le Beau Navire that used to hang in the family living room. There are worse things in life. Fascinated by this portrait of a blue woman whose color blends with the sky, she barely listened to her father’s reprimands. “He decided to sell it, but to buy something more important,” she says. Petit’s private collection featured masterpieces, including two de Chirico paintings: Mélancolie d’un après-midi (Melancholy of an Afternoon), dated 1913, which was given to the Pompidou Center in lieu of estate taxes, and La Pureté d’un rêve (The Purity of a Dream), which Filipacchi coveted for a long time. Not wanting to sell it, Petit asked for a huge sum. The press tycoon had to wait until his friend’s death in 1997 to buy it at auction. It must been a bittersweet moment. Luckily, the bidders at the Stéphane Petit estate sale will only feel happiness.


What are the Stéphane Petit estate’s highlights?
Leonora Carrington’s two paintings, of course! They’re magnificent! And extremely rare. You never see anything from that period, 1938. The works that come up for auction are usually from her later, Mexican period. They’re worth a lot, by the way.

Apart from those spectacular paintings, what stands out in this collection?
Around 20 drawings by Salvador Dalí! Isn’t that moving? There are also sculptures by the master, all made during his lifetime. They have nothing in common with the posthumous casts downgrading the market. I could also mention drawings by Arp, Tanguy and Brauner that went through André-François Petit’s gallery.