An Ivory from the Carolingian Renaissance

Carved towards the end of the 9th century on the theme of Christ's entry into Jerusalem, this ivory was used as a binding plate for an sacred book: a rarity similar to works by the School of Metz. 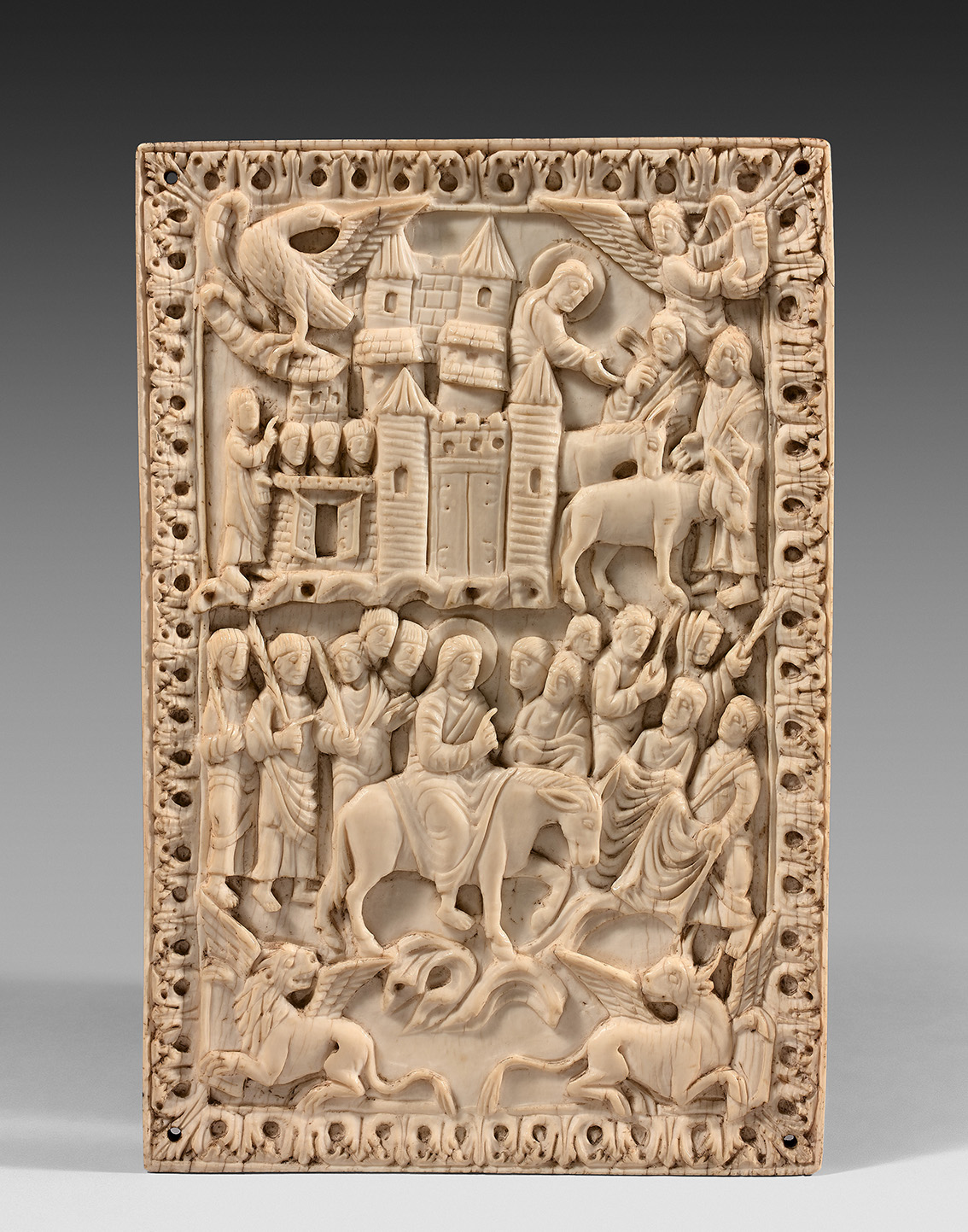 Having remained in the same family for several generations, this ivory binding plate in excellent condition is a rarity. Its size and impressive flatness indicate that it was carved from a fairly broad elephant tusk. A highly reliable carbon-14 test has dated it to between 688 and 884, i.e. during the Carolingian Dynasty when ivory carving, which had declined with the fall of the Roman Empire, was undergoing a revival. During antiquity, there was a thriving trade in ivory, which came mostly from Africa via Egypt and Syria, and from the East via Persia, and there was eventually a dearth of the precious material. Shortages led to the re-use of older panels, whose former reliefs were planed down. But this is not the case with this plate, which illustrates the predominantly religious use made of ivory during the Carolingian period. These works were mainly used as binding plates for sacred books commissioned by the Frankish court, clergymen close to the imperial family and an aristocratic elite that often came from prominent Gallo-Roman families. The renaissance overseen by Charlemagne was based on the art of antiquity: a heritage that flourished in ivories, with iconography inspired by consular diptychs. Official art was disseminated over a vast territory by the ivory centers that developed in major cities, with stylistic variants historians are still endeavoring to list. This late 9th-century plate can be linked with the work of the second School of Metz, or "Lotharingian school", named after Lothair II's kingdom, which extended from present-day Lorraine to the city of Aachen. The somewhat hieratic and stereotyped figures are laid out in a dense composition. From left to right and from top to bottom, the plate illustrates several stories from the Gospels, following their chronology. First, we see the miraculous resurrections of the son of a widow in Nain, Jairus's daughter and Lazarus. Typically only the latter is depicted; here the artist cleverly encapsulates the various episodes by depicting three heads emerging from a tomb. This is followed by another highly original feature: a rare illustration of an episode from St. Matthew's Gospel, where two Apostles bring a donkey and her foal to Christ on his way to Jerusalem so that the Savior can enter the holy city surrounded by the twelve Apostles, whom he blesses. Allegorical representations of the Evangelists in the tetramorph—an eagle for John, a man for Matthew, a lion for Mark, and a bull for Luke—are seen in the corners of the composition, which is divided into two registers by wavelets and framed by a frieze of acanthus leaves. The association of these symbols with Biblical scenes is intriguing, however, as they are usually found in depictions of the Crucifixion or Christ in Majesty. All singular aspects that certainly encourage further explorations of Carolingian ivory art...