Its rareness and quality make this devotional work exceptional. Never before seen on the market, its discovery is an event. 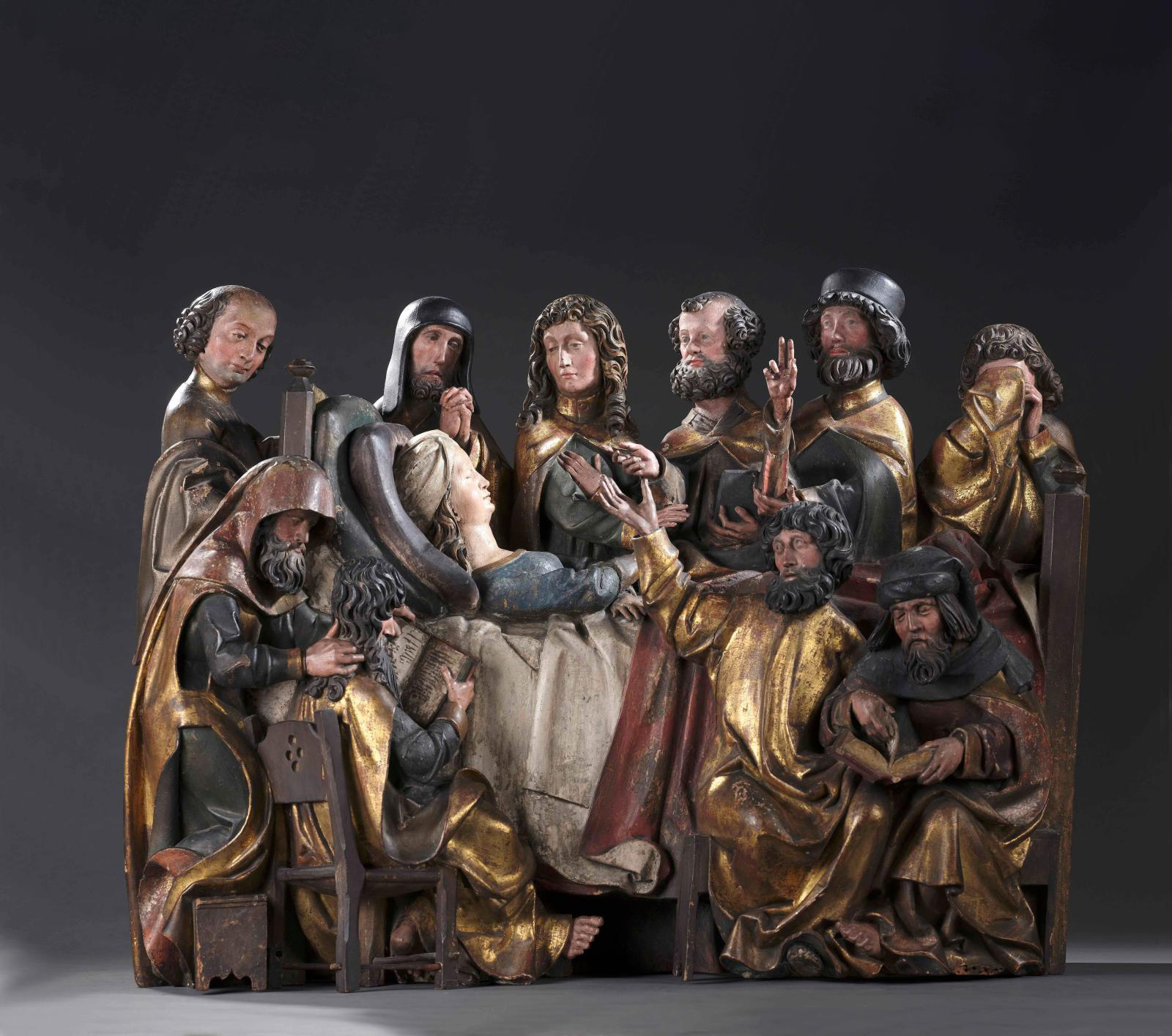 This fragment of an altarpiece carved from two limewood logs in the first quarter of the 16th century was found among a collection of paintings by Vuillard, african masks and asian objects gathered together in a paris apartment by a family of collectors. Such works seldom appear on the market; this one never has. It belonged to Louis Loucheur (1872-1931), Minister of Finance in 1925, and has been owned by his descendants ever since. Although this large altarpiece depicting the Dormition of the Virgin has been restored twice, the subtle flesh tones remain. It still has azurite blue pigments, gold obtained using three different techniques and traces of silver, underscoring the sumptuousness of the original polychrome, which aimed to give life to the figures and, through them, the Christian message. The remarkable state of conservation of this sculpted scene, which is also of a considerable size, is particularly noteworthy. Just a few fragile hands have been replaced and only two apostles are missing. The other ten, probably carved separately, gather around Mary on the group’s left-hand side. Another relief depicting the Coming of Christ may have surmounted this scene, which must have held the central position in an altarpiece devoted to the Virgin’s life. The artist carefully individualized the figures, using high relief to accentuate their expressiveness. Through their faces and attitudes, and even in the positioning of their hands, they each evince their sorrow over the Virgin’s death differently. Luminous and serene, Mary smiles at eternity. The figures’ naturalistically depicted emotions go hand in hand with the realistic-looking bedroom. This type of sensitive representation developed in the late 15th century, as the Church sought to grow closer to the faithful by allowing the expression of human passions. The Dormition of the Virgin became a more popular theme, especially in altarpieces. The faces in this one are similar to those in works by Niklaus Weckmann and Daniel Mauch in Ulm and Erasmus Grasser in Munich. The drapery seems to be influenced by the work of Martin Hoffman in Basel and by Freiburg sculpture, itself marked by the canons of the Upper Rhine, which spread all the way to Swabia. the sculptor of this altarpiece borrowed from the finest styles to move 16th-century believers. Today’s collectors will be touched as well.

A Carved Miniature from the Workshop of Adam Dircksz