A history impregnated with the industrial spirit of the 19th century, when a plethora of department stores sprang up, lies behind the creation and development of the current Palais de l’Art Déco in Saint-Quentin. 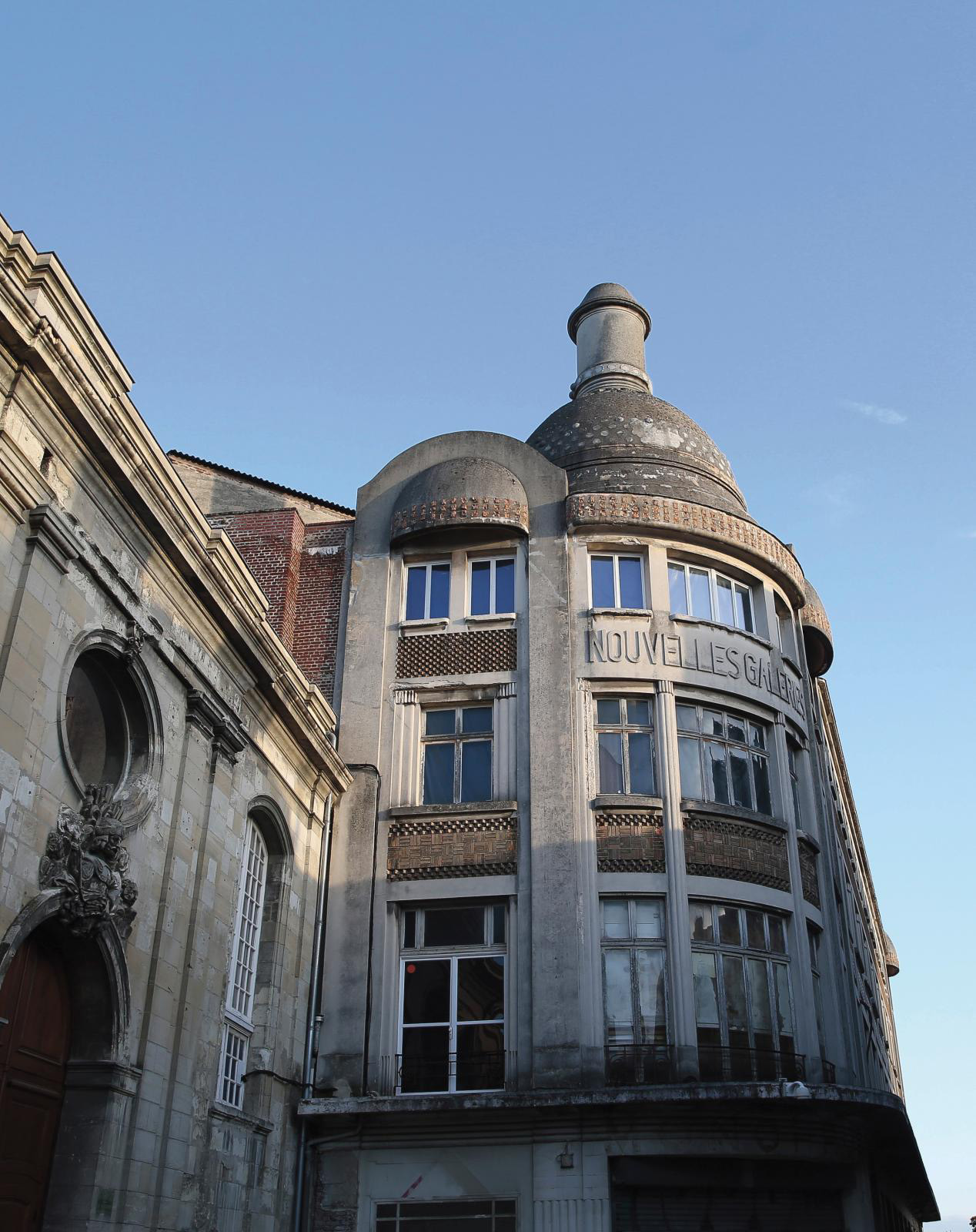 In the 19th century, France went through an unprecedented commercial and industrial revolution after the Le Chapelier law of 1791 proclaimed unrestricted freedom of trade. The capital set the tone with Le Bazar Français (1819), Le Bon Marché (1853), Le Bazar de l'Hôtel de Ville (BHV, 1856), La Samaritaine (1870) and the Galeries Lafayette (1893). These new meccas of consumerism spread throughout the country. Another aspect also emerged: the display of moderate, non-negotiable prices. During these early stages of liberalism, ambitious young entrepreneurs soon sensed that a combination of trade, finance and audacity was an excellent springboard for social and professional advancement.

Saint-Quentin, a town in the Hauts-de-France department of Northern France, was inevitably sucked into this huge steamroller of a system. Stores and stalls proliferated in the city center and the suburbs, and the retail and wholesale sector, often focused on textiles, attracted customers and the press. Nonetheless, starting in the 1870s, the range of products became so diverse that many stores took on the name of "Grand Bazar": usually a huge building with a metal structure and a large glass roof on the street, topped by a glittering sign. It was in this vibrant atmosphere of commercial competition that the Grand Bazar de Saint-Quentin, which became the Palais de l'Art Déco 127 years later, opened on December 15, 1894, at 6 p.m. Its founder Antoine Delherme (1855–1924) adopted an innovative advertising strategy.

From Le Grand Bazar To Les Nouvelles Galeries
The slogan "Free admission—buy nothing before visiting Le Grand Bazar" made a big splash. One of the galleries on the second floor was turned into an events room, where the Lumière Brothers' films were shown daily. In around 1902, Antoine Delherme decided to merge with Les Nouvelles Galeries founded by Aristide Canlorbe in 1891. In 1910, the designation "Grand Bazar" was replaced by "Nouvelles Galeries et Magasins Modernes". This was a golden period for these stylish and popular "new galleries and modern stores", where senior officials, the middle class, beautiful, elegant women and workers alike all mingled around the enticing stands. This entire little world basked in the carefree spirit of the Belle Époque: a society where the decorative and architectural revival made a striking impression.

At the turn of a century ushered in by the 1900 Universal Exhibition at the Grand Palais, Art Nouveau (1890–1914), though it had gifted exponents in artists like Hector Guimard, Victor Horta and Gaudi, never really found an audience as it was too elitist, convoluted, exuberant and pompous for many critics of the time. Rather than the virtuosity and technical prowess of this style, tastes veered towards the pure geometric forms of Art Deco (1919–1940), better suited to the modern life and industrialization of the Roaring Twenties.

A Flagship of Art Deco
When the 1920s dawned, Saint-Quentin was licking its wounds. Unremitting shelling during the war had destroyed most of the city's monuments and businesses, including Les Nouvelles Galeries, blown up by the German army. Antoine Delherme decided to set a temporary version of the store in the city hall square, in the former Brasserie de la Bourse, one of Saint-Quentin's few Art Nouveau-style buildings. This gave him time to apply for a new building permit and enlist the architect Sylvère Laville (1865–1955) to oversee the project. The omnipresence of Art Deco, which Saint-Quentin was one of the first cities to pioneer, met the requirements of new architectural designs, with sober, elegant lines a long way from the complex, undulating curves of Art Nouveau.

Sylvère Laville took all this into account while perpetuating the principle of window facades designed to connect the interior with the exterior. The same went for the rotundas, those urban beacons of pre-war department stores, which he stripped of all artifice. Structures were in reinforced concrete, sometimes decorated with bas-reliefs, and all conceived along the lines of pure, rigorous geometry. Inside, the borders of the wrought-iron passageways sported golden staff decorations in the form of festoons, dotted with white cabochons. Sconces and chandeliers disappeared, as did the furniture, and priority was given to the space and the display cabinets where items were stored. It was a real jewel of Art Deco, and a dazzling success. But Antoine Delherme died in 1924, a year after receiving the building permit. The work was carried on by his son Pierre, and on April 9, 1927, Les Nouvelles Galeries opened to a public that was already won over.

From Commerce to Leisure
Going beyond the lavish press reviews, Saint-Quentin made the most of this local success to become the economic capital of the Aisne department. During the interwar period, Les Nouvelles Galeries underwent multiple transformations, particularly when business languished during the 1929 crisis. To mitigate its effects, Pierre Delherme decided to open a new store on the first floor in November 1933, Prisunic, renamed Monoprix in 1947. However, Les Nouvelles Galeries remained in operation until 1939. In 1935, he inaugurated a projection room, the Forum, which showed films, newsreels and cartoons. After the Liberation, Saint-Quentin was born again. Balls were staged in the Forum, which became the Lido-Phare (1946), the Trianon (1952) and then the Élysée-Dancing, in 1956. At the same time, a room dedicated to sports, the Élysée-Sport, was inaugurated in 1954. But this prosperous period of dancing, film screenings and sports events came to an end in 1963, and Les Nouvelles Galeries fell into oblivion, only rising from the ashes half a century later with the European Heritage Days.

This rebirth spawned a wealth of events linked with Saint-Quentin, its history and Art Deco. After the venue was brought up to standard to receive the public, the exhibition "Art Deco and Saint-Quentin: The Invention of an International Style" was staged from December 2015 to March 2016. A year later, a new exhibition was created in partnership with the Cinémathèque Française: "1920 in Saint-Quentin: Cinema and Music Hall of the Roaring Twenties". Proud of their heritage, the people of Saint-Quentin were thrilled by the official opening on June 5, 2021 of the Palais de l’Art Déco, still in its original condition, on the occasion of the exhibition "Le Grand Magasin. Fashion and Lifestyles from 1920 to 1930." Several themes (including sport, aviation and the automobile), all devoted to this period of artistic and social frenzy, have been earmarked by the city hall and the regional council for future exhibitions. The city of Saint-Quentin is keen to expand its programming policy to encourage and centralize any regional Art Deco-based initiatives as part of Aisne's historical heritage. This is a challenge worthy of the Roaring Twenties, which the region is eager to meet.