Amy Sherald’s new gallery show “The Great American Fact,” at Hauser and Wirth in Los Angeles, showcases her insistently personal depictions of Black Americans as well as the direction her work has taken since executing the official portrait of Michele Obama and a portrait of Breonna Taylor for Vanity Fair. 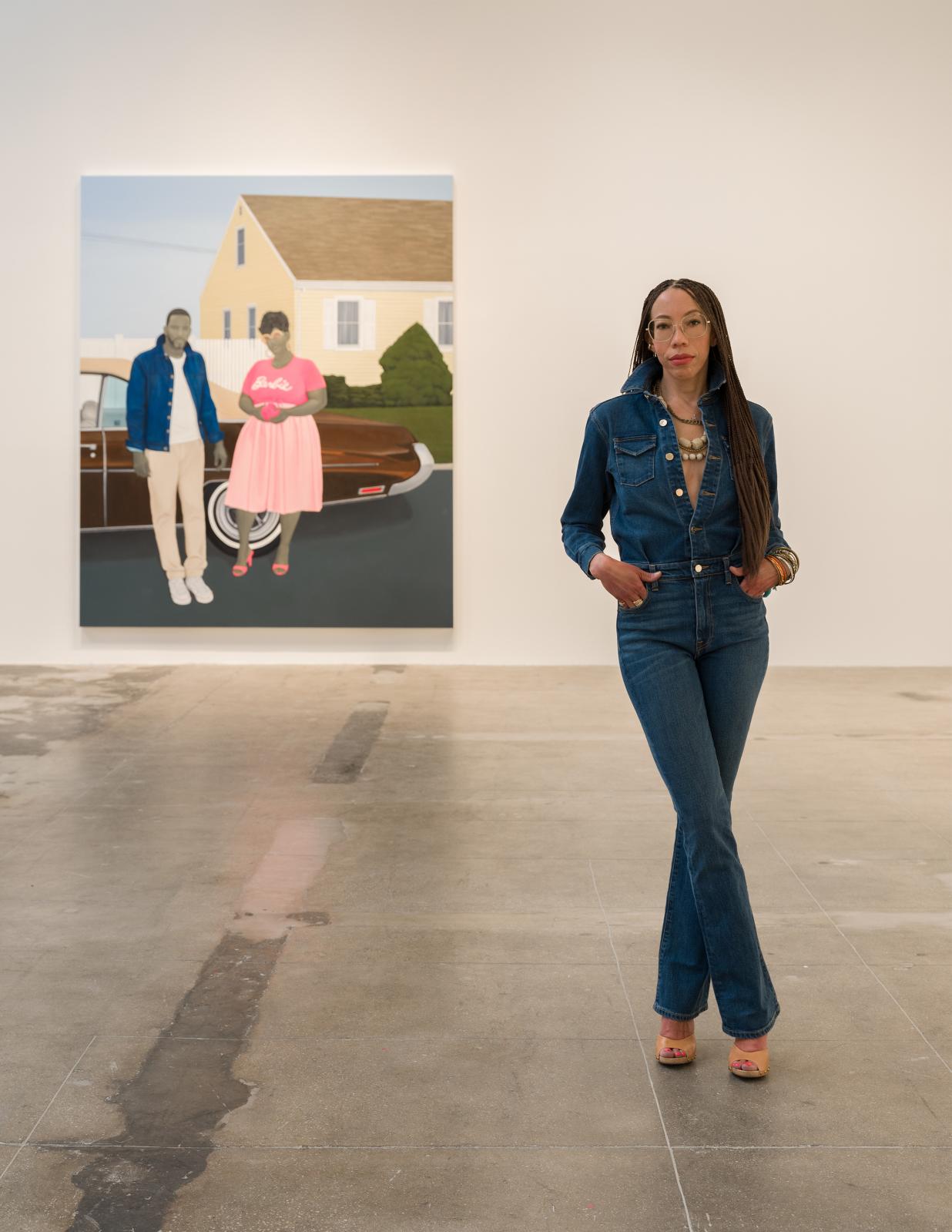 The intensity of color is inevitably one’s first impression of a painting by Amy Sherald. Based on photographs the artist takes of strangers who catch her eye, canvases like A Bucketful of Treasure (Papa Gave Me Sunshine to Put in My Pockets…) foreground those unique personalities by setting the figures against a field of saturated color. Given the artist’s preference for large formats—one work in the exhibition measures nearly 11 by 9 feet—the spectator is immediately enveloped in color, just as the depicted subject is swathed in the pattern of the clothing Sherald specifically chooses to highlight their individuality. In a recent conversation with the press organized to open her current show “The Great American Fact” at Hauser & Wirth Los Angeles, Sherald described her “search for the colors that are between the ones we already know.” The results recall Matisse for their reveling in color’s infinite variety and ability to transport.

Color also strategically disarms in a Sherald. Her insistence on its visual pleasure simultaneously undermines a secondary sense of the word “color” as an inevitable descriptor of the individuals she paints. Sherald is acutely aware of the historical under-representation of Black people in the European artistic tradition, and how their rarity will condition every viewer’s engagement with her art. The artist speaks of a division in Black self-representation between the political and the private, between “resistance and the interiority we only share with our loved ones.” She wants her paintings to offer Black viewers “a space to have a breath, to receive love” and to find out “who we are” beyond constant reaction to racist violence.

At the same time, Sherald knows that her paintings will offer many non-Black spectators their first intimate encounter with Black subjectivity. The relative novelty of coming across a Black face in a gallery and the preconceived notions about Blackness that it will trigger risk overwhelming the unique personhood – such as the young woman featured in Hope is the Thing with Feathers (The Little Bird) -- that she celebrates in her work. That simultaneous anticipation of in-group and out-group viewership is tricky terrain, but one that Sherald navigates with the agility learned by any Black American forced to navigate a racialized world.

Sherald has been much discussed for her use of grisaille to treat her subject’s complexions, which she claims “universalizes” them. The artist first deployed grayscale after exploring with a friend the different manners in which they had been trained to under-paint the human figure. At first, Sherald simply enjoyed the visual contrast created between the preliminary layers in black and white and the surrounding hues. She eventually realized that skin tones rendered in gray usefully resisted any definitive attribution of race.

It’s a tremendously effective strategy. Her figures retain a darkness that remains part of their lived identity, but they cannot be reduced to their “color” because grayscale eludes true visual realism. To my mind, however, it is the initial, surrounding burst of pigment that is engaged universally, so that skin color becomes less definitive of the human being who stands at the center of the canvas. Color for Sherald therefore buffers the social circumstances of viewing Blackness in art, recalling her audience to a common humanity. In order to apprehend Sherald’s subjects, the viewer focuses on facial expression and posture, with racial identity not exactly done away with, but hovering as a simultaneously definitive and subsidiary part of their stories.

Focused on individual figures for much of her career, Sherald has recently branched into figural groupings. Building up to a painting like An Ocean Away worried her in that ''multiple figures became too visually loud'' and she wanted “to hang on to intimacy.” Moving away from her usual flat backdrops, Sherald’s groups are balanced by their placement in more elaborate tableaux comprised of landscape and props such as the car, white picket fence, and plastic flamingo cup in As American As Apple Pie. Sherald’s construction of these scenographies is non-linear, depending on random meetings, internet searches, and attentiveness to the built and natural environments.

As American As Apple Pie
Those larger settings inevitably offer a more socially grounded narrative due to the associations they evoke, an approach that threatens to crowd out the pronounced interiority of her previous work. At the same time, those associations gather these individuals into a community, but not a community of explicit Black resistance. These are participants in shared leisure. For example, the couple depicted in As American As Apple Pie appealed to Sherald for their passion for vintage cars. She connected with the young people depicted in An Ocean Away through an internet search for “black surfers.” Such depictions of leisure expand upon the intimacy of the single portraits to build out a shared world of passions that were previously only hinted at in her figures’ fleeting facial expressions.

The notion of a shared world finds Sherald grappling more explicitly with American identity in the current show at Hauser & Wirth. Indeed, her exhibition title is taken from a text by foundational black feminist Anna Julia Cooper that refers to African-Americans as “the American fact,” as revelatory of the full truth of the United States as a political and social project. Sherald spoke about being “tied to America” since the fame her Michelle Obama portrait has garnered her. In keeping with her careful exploration of the line between the self and the social, and after having become a prominent African-American voice in US cultural life, "The Great American Fact" marks new formal explorations in Sherald’s work as well as a new specificity in her depiction of Black selfhood that reorders notions of the “All-American” to truly include all Americans.

Worth Seeing
“The Great American Fact”, Hauser & Wirth Gallery, Los Angeles.
The exhibition can be visited in-person by reservation via the gallery website.
Until June 6, 2021