The delights of the fabulous collection of Sheikh Hamad Bin Abdullah Al Thani, cousin of the Emir of Qatar, are now on display for the next 20 years in the Hôtel de la Marine, the former French Royal Garde-meuble. Its chief curator looks back at its origins and explains why it ended up in Paris. 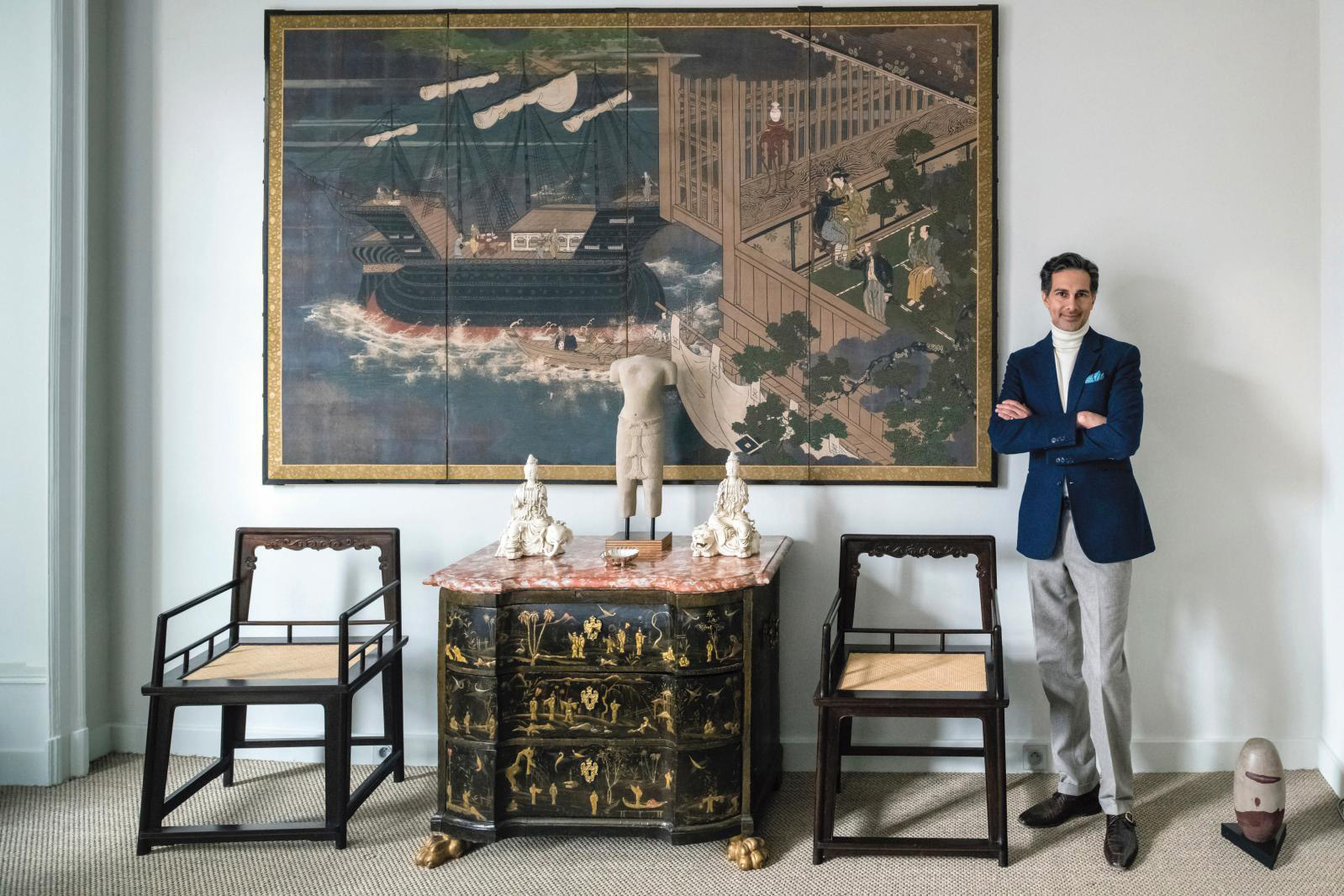 What kind of collector is Sheikh Hamad?
He is impassioned, interested in every culture and era, and highly appreciative of all forms of refinement. He discovered art when he was very young while traveling in Europe with his parents. At the age of 6, he visited the Louvre Museum for the first time with his mother, and after that, his taste developed in leaps and bounds. His first purchase, at 18, was a pair of silver coolers by the British silversmith Paul Storr (1770-1844). He now has 40 of them. Meanwhile, his interests obviously evolved. In the beginning, when he was influenced by his memories of palaces and castles, his main areas of interest were enamels, porcelain, silverware and furniture. Then he moved into the great civilizations in a universalist spirit, leaving the classical territories of Greece, Egypt and Rome to explore the treasures of Mesoamerica, Africa and Japan. His collection currently consists of between 5,000 and 6,000 pieces. Ranging from antiquity to the present day, it is remarkably eclectic, with works from the Renaissance, Indian jewelry, African sculptures and silverware from the Achaemenid period alike. Sheikh Hamad is particularly sensitive to superb craftsmanship and materials, and has a fondness for fine metals like silver and gold, precious stones and hardstones like agate, jasper and carnelian. In a word, this is really a very personal collection. Although he sometimes seeks advice from experts, his choices are dictated by no one. However, the spirit of his purchases has changed. They were initially intended to embellish his homes. But in the 2010s, he realized that they could interest the public as well, and his acquisitions, which had always been of high quality, became increasingly museum-worthy.

When did you meet and what is your role?
In 2007, I had recently become International Asian Art Director at Christie's in London, after working as a curator at the Victoria and Albert Museum for 12 years. Then Sheikh Hamad contacted me after reading one of my books, Made for Maharajas (Antique Collectors Club, 2006), published shortly before. The cover caught his eye, which featured a painting by Bernard Boutet de Monvel of the Maharajah of Indore, dressed in white, wearing a turban and jewelry. He had a work from the same series in his palace in Doha, and wanted to meet to talk about it. So we got to know each other. Our relationship continued to develop, as we shared many interests. Whenever he came to London, we would visit exhibitions or private collections together. When he invited me to his house, I was also impressed to find catalogs bristling with Post-its piled up in his living room: he was always looking to further his knowledge and asked me questions constantly. I started working with him sporadically, writing articles for publications. Then in 2014, I began organizing exhibitions in international institutions like the Metropolitan Museum of Art in New York, the Victoria and Albert Museum in London, the Imperial Palace Museum in Beijing, the Grand Palais in Paris and the Doge's Palace in Venice. Finally, in 2017, I left Christie's because I couldn't manage both jobs properly at the same time, and became the chief curator of this huge collection. It's an immense task, because, at the same time as the exhibitions, the teams, I have to manage other matters like conservation, insurance, and all the deposits and loans the Al Thani Collection grants to museums around the world, not to mention the partnerships signed with institutions like the Hermitage in St Petersburg. And then this major project with the Hôtel de la Marine came along, with the restoration of the 18th-century apartments of the King's Intendant in charge of the Garde-meuble de la Couronne under Louis XV. We are now opening a space to present the treasures from the collection within this historic building.

How did this idea of a permanent installation come about, and why Paris and the Hôtel de la Marine?
The idea arose quite recently, from an observation. Since 2016, the Al Thani collection has been staging two or even three exhibitions a year. As curator, I was worried about this because I felt some pieces were moving around too much. So Sheikh Hamad then began considering the idea of a permanent home for his masterpieces, as many of them are fragile. We first began discussions with a British institution, which came to nothing. Around the same time, Prince Amyn Aga Khan, one of the sponsors for the Hôtel de la Marine restoration project, contacted Sheikh Hamad to alert him to the Place de la Concorde project. At his request, I made a quick trip to Paris to meet Philippe Bélaval, president of the Centre des Monuments Nationaux (Center of National Monuments, CMN), the project operator. Although restoration work on the Intendant's apartments had begun, the CMN was still wondering what to do with one particular 500 m2 (5381.95 sq ft) space in the building, lying on the same floor. Unlike these rooms, this space was totally devoid of decoration, because it was originally just a storeroom where the tapestries of the royal collections were kept. The CMN suggested making it available to the Al Thani collection. For Sheikh Hamad, who feels enormous affection for the country that nourished his passion for art, it was an unexpected chance to be able to present the collection in a monument like this in central Paris—overlooking the Place de la Concorde to boot: a truly amazing location. And it all echoed the history of the Hôtel de la Marine. Designed to house the royal collections under Louis XV, this former royal furniture storehouse seemed like the ideal setting for the collection of a modern-day prince. So in October 2018, an agreement was signed between the CMN and the Al Thani Collection Foundation, now authorized to occupy the premises for 20 years. The Foundation also decided to fund the restoration of the apartments. In the process, it contributed to their refurnishing by donating a commode by Jean-Henri Riesener. In 2019, this masterpiece of marquetry, originally commissioned for the apartments, reappeared on the market at a Christie's sale in New York. Sheikh Hamad bought it, enabling it to return to its original home.

What exactly will we find there?
There are four galleries. They have been designed by the Paris-based Japanese architect Tsuyoshi Tane, who was recommended by the artist Hiroshi Sugimoto. There was obviously no intention of creating a pastiche 18th-century interior. On the other hand, the final result had to be both elegant and minimalist, so that visitors are not distracted by the decor. And Sheikh Hamad himself chose the type of objects he wanted to exhibit. All in all, 120 pieces were selected. We then discussed what the main themes should be. The first gallery reflects Sheikh Hamad's universalist vision through seven masterpieces. Spanning 6,000 years of history, they each come from a different culture and illustrate the breadth of human creativity. They include a marble idol from Asia Minor made between 3300-2500 BCE, an Egyptian pharaoh's head in red jasper from the 18th dynasty, a sitting gilt bronze Chinese bear from the Han period, and a Mayan pendant mask made of wood, jadeite and shells. The second gallery is devoted to representations of the human image. Here, in protective showcases, eleven sculpted faces with various origins, aesthetics and personalities are hung so that their eyes are aligned. Among them are a quartzite man's head from Mesopotamia of c. 2050 BCE, a magnificent bust of Emperor Hadrian, probably made around 1240 in the court workshop of Emperor Frederick II of Hohenstaufen, and a reliquary head from Gabon dating from c. 1700-1850. For visitors, this confrontation with humans from other civilizations is sure to be a moving experience. A third gallery, with an intimate atmosphere, evokes ancient treasure, and contains pieces made of precious materials, including gold and silver vessels, finely-worked hardstone objects, jewelry and ornaments. The last gallery is designed for temporary shows, which we will organize at a rate of two a year. The inaugural exhibition, on Islamic art, features pieces that would have been found at court, from the Umayyad Caliphate to the Mughal Empire, including precious manuscripts, textiles, ceramics, jewelry, ironwork and glass. In the future, we will also collaborate on these events with other institutions, including partner museums.

Does the opening of this prestigious space spell the end of the international exhibition policy?
No. In fact, we have scheduled one for 2022 at the Kunsthistorisches Museum in Vienna. But we are only just starting our new adventure at the Hôtel de la Marine. The two annual exhibitions we have planned require a lot of work. The venue itself looks set to become a major tourist destination. So, let's say that before we set out into the world again, we'll first concentrate on Paris, where the public is generally very knowledgeable. And then we'll see...