A rendez-vous with Subodh Gupta

Subodh Gupta is moving into the Paris Mint for his first ever retrospective in France. A chance to talk to the Indian contemporary art star about the spiritual and political forces at work in his output. 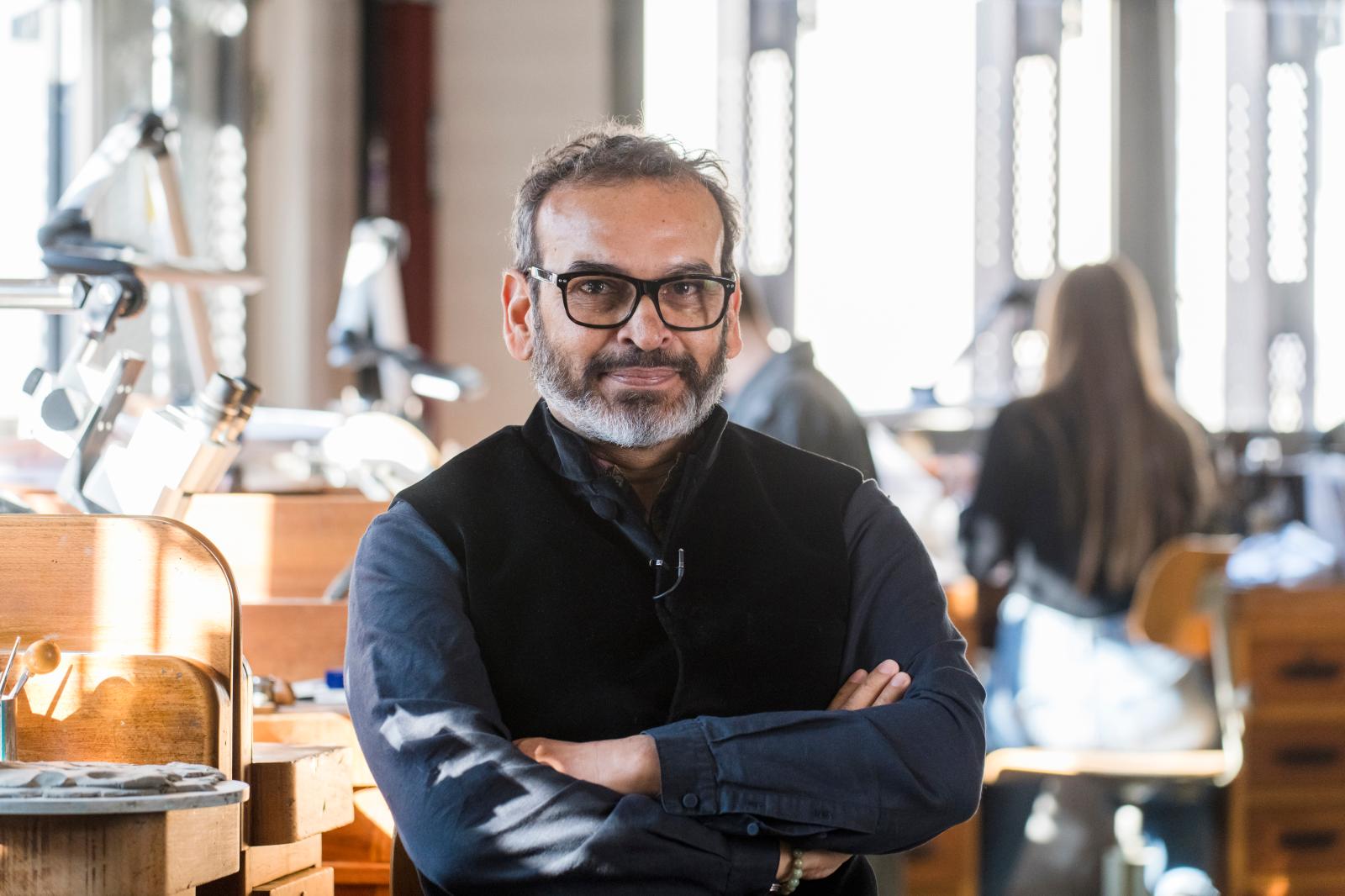 Subodh Gupta, in residence at the Paris Mint workshops.
© Martin Argyroglo
Subodh Gupta, in residence at the Paris Mint workshops.
© Martin Argyroglo
Why did you call the first retrospective of your work in France "Adda/Rendez-vous"? The title also applies to a work created specifically for the exhibition at the Paris Mint. Can you tell us about it?
Adda is very difficult to translate, but it can be roughly defined as a place where people gather to chat and have casual intellectual discussions – a kind of cultural hangout. Like the image we have of the regular debates prevalent in Ancient Greece in the time of Socrates and Plato, addas are generally held in somewhat open, public spaces. The word also describes a get-together between friends for long, informal conversations, often about politics and topical issues. The work called Adda is set up in one of the outer courtyards of the Mint. It was made specifically for this exhibition. I think it’s interesting because it encourages the public not just to look at the work but also to walk through it and interact with it. The pillars in the work are inspired by Indian temple pillars, but also evoke those of Greek and Roman times. They are classic elements of both Indian and European public architecture, so I am hoping people will make those connections in the dialogue.

When you create bronze or aluminium replicas of everyday objects, what's the aim?
Since I was a child, I've always been fascinated by stories where a fairy or magician touched something with their wand and turned it into gold! In a way, I am drawing on the same fantasy when I cast these objects in metal. Somehow when you do this with the most ordinary objects you are always surrounded by and often ignore, whether a potato or a taxi, people suddenly start seeing them as valuable, and noticing their beauty. The object looks identical, but has been transformed into something else.


Is this a readymade approach?
When I first started working with utensils, I actually had no idea of this pre-existing history and the tradition of using readymades. I only found out later who Duchamp was! So the method I developed in working with material is my own, in a way – not exactly along the same lines as the readymade. It's a material I transform into something else, thereby creating a work of art. It’s not just about the object itself, as it would not have any meaning or be a piece of art on its own; it's also about the new form it has become a part of.

In "Very Hungry God" (2006), a monumental skull created with hundreds of sparkling stainless steel utensils used in the majority of middle- and working-class Indian kitchens, you highlight the contrast between the glittering appearance of this inexpensive dishware, which symbolises prosperity, with the fact that some of India's population are struggling to fill these containers. Today the work is owned by the billionaire François Pinault and is exhibited at the Paris Mint. Isn't that a paradox?
Yes, it's a total paradox. This is how the contemporary art world is: complex, and full of irony. However, I don’t think it means that artists can only make meaningful, powerful or politically-charged art works by rebelling against the system. The work was originally conceived with certain ideas in mind, and I think it still stands for those ideas regardless of its value or the commercial exchanges surrounding it. In fact, I'm very glad the work is being shown at the Mint, where a broader public will have a chance to see it and start conversations and debates around the issues raised by the work, and perhaps the contemporary art world in general.
" Since I was a child, I've always been fascinated by stories where a fairy or magician touched something with their wand and turned it into gold! In a way, I am drawing on the same fantasy when I cast everyday objects in metal. "
Three works are on display at the Musée du 11 Conti, in dialogue with the historical collections of the Paris Mint. Opposite a gold one-kilo Taj Mahal coin and the museum's standard kilo, you are exhibiting "1 KG War" (2007), a one-kilo hexagonal chunk in 24-carat gold. Is this work a metaphor for the monetary conflicts that provoke wars in the world?
Yes, that's definitely something I was thinking about when making this work. In India, you most often see these hexagonal weights being used by vegetable sellers: they are always in a rush, and the market is crowded, so they place the weight on the scale and yell: "How many kilos of potatoes would you like?!" With everything you hear about the military industrial complex and the way in which wars and conflicts are discussed, I imagined a politician saying: "I want a kilo of war!"

Two medals were created specifically for the exhibition by the Paris Mint. What motifs did you choose?
One medal has Very Hungry God on it. But the other medal, which I worked on myself specifically for the show, is very special and unique. It is a relief based on a cluster of various spices I arranged. Food and cooking are central to my approach, and this was a fun project I had a chance to create right here in the Paris Mint workshops.


Can you explain to us what the Indian concept of the sound "Anahad Naad" means?
Anahad Naad is a Sanskrit word, but it refers to a concept found in many Asian religions. While the most direct translation is ‘unstruck sound’, it is also evoked by more familiar phrases like “the sound of one hand clapping” or “the sound of silence.” Anahad is not the result of external friction. It is a primordial sound that comes from within, a sound that has no beginning or end, a sound that transcends space and time, the sound of human consciousness, the sound of the cosmos. This idea is directly explored through a set of suspended sheets of reflective stainless steel, which produce a looped wave of clamorous clanging and an aggressive movement, disfiguring and distorting the viewer’s sound and visual landscape. However, the vibrations from the sheets create an upheaval that is not solely a disturbance but almost a synesthetic experience – a mingling of sensory domains, shaking the viewer within and without.

You compare kitchen utensils to stars in the recent paintings In this Vessel Lies the Seven Seas… Is food an allegory for the universe?
I don’t see food as an allegory for the universe so much as the utensil actually holding the food: the pots and pans used to cook food, and the plates used to serve it. I have worked with utensils for many years. I started by using shiny new stainless steel items, and then slowly began incorporating old, worn utensils, often made of aluminium and steel. When we look at these paintings of old utensils in enlarged and isolated form, suddenly the scratches start to seem like craters, and signs of wear and tear lead to bizarre, otherworldly colouring. You think you are looking at a painting of a distant planet – but it’s just an ordinary old frying pan! These paintings are really a reflection of that sense of finding the whole cosmos in my plate.
TO SEE
"Subodh Gupta, Adda/Rendez-vous", Monnaie de Paris (Paris Mint), Paris.
Until 26 August 2018.
www.monnaiedeparis.fr