It is highly likely that this rare cabinet by Josef Hoffmann was presented at the Spring Exhibition of Austrian Decorative Arts of 1912. If so, it is the only piece from his historic exhibition stand ever to come up in the market. 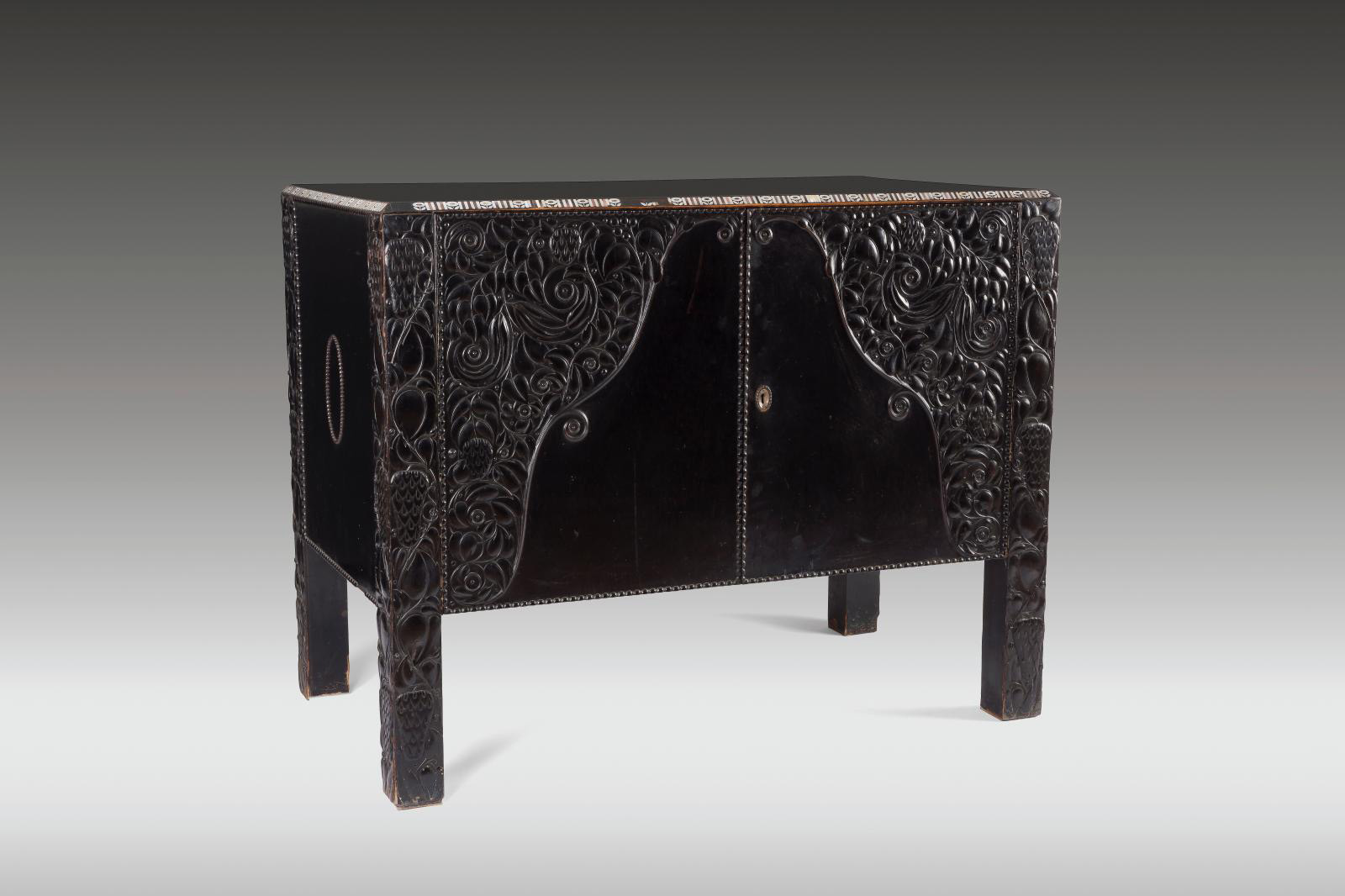 In July 1911, Josef Hoffmann (1870-1956) met 24-year-old Dagobert Peche at a banquet to honor Art Nouveau architect Otto Wagner on his 70th birthday. They became not only friends, but also artistic soul mates. A founder of the Vienna Secession, Hoffmann quickly dubbed Peche “Austria’s greatest decorative arts genius since the Baroque period”. He drew inspiration from the younger man’s formal freedom, ample forms and emphasis on detail. His work took a one-way turn, leading several years later to this black wood cabinet, whose overall design looks nothing like what Hoffmann had created before. Its powerful form almost brings a medieval chest to mind, while its ornamentation is more Baroque than Secessionist in spirit. The Austro-Hungarian decorative arts of past centuries are reinterpreted here through the façade decoration by borrowing its vocabulary from plants.

The beaded oval surrounding the lock and use of inlaid mother-of-pearl highlight the top’s edge. This recollection of the past, which Peche pioneered and Hoffmann picked up afterward, has a special significance given the regional political events of the period. The weakness of the Austro-Hungarian Empire’s unity inexorably led to its breakup after the First World War. But there is no hint of that here: the cabinet’s sturdy form embodied a new direction, the writing of an unprecedented chapter drawing upon the decorative arts of a glorious national past the better to build the future. The Österreichischer Werkbund, the Austrian branch of the Deutscher Werkbund, illustrates this burst of hopefulness. Co-founded by Hoffmann in 1912, the organization fostered interaction between various local artistic expressions. It was officially founded in June 1912 on the sidelines of the fifth annual meeting of the Deutscher Werkbund, which took place in Vienna. On that occasion, the group’s Austrian members, wanting to present their latest achievements to their German colleagues, held a show of their most recent work at the Österreichisches Museum für Kunst und Industrie in Vienna. This event, the “Frühjahrsausstellung Österreichischer Kunstgewerbe” (“Spring Exhibition of Austrian Decorative Arts”) showcased the quintessence of national arts and crafts. Hoffmann’s cabinet was most likely there. This one-off piece is similar to a six-door cabinet seen in photographs of his stand at the 1912 exhibition. No piece of furniture from that stand has ever appeared on the market until now.