A Rare Early 17th-Century Guitar: A Masterpiece of Marquetry

This guitar, one of the few to survive from the early 17th century, is attributed to Jacob Stadler, a German stringed instrument maker who worked in Italy. It will go up for auction soon. 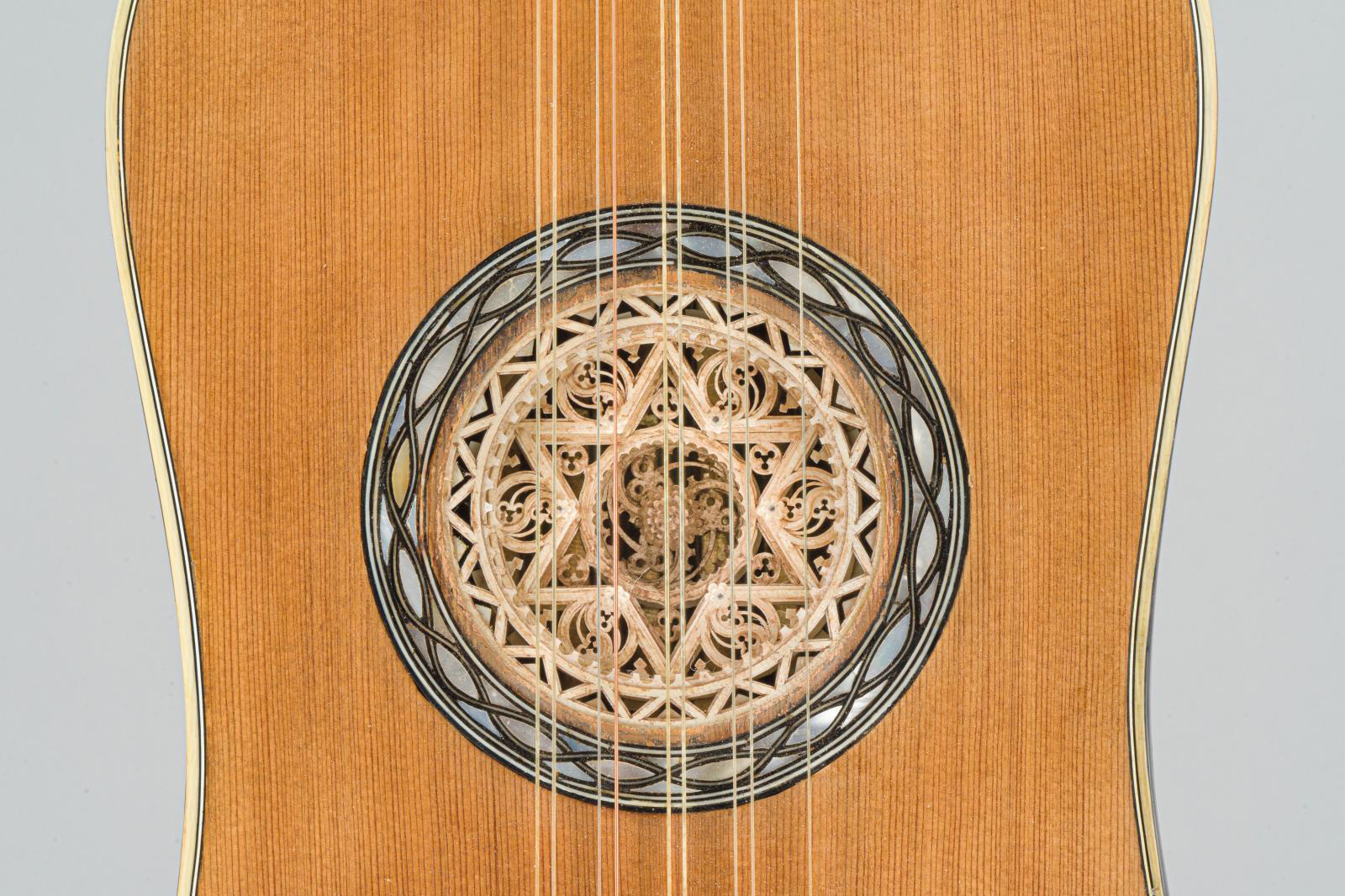 At Vichy Enchères on May 1, a Paris-made guitar by Alexandre Voboam from the second half of the 17th century fetched €57,150, doubling its estimate. The price was right: although the Voboams dominated French-produced guitars and viole da gamba from 1630 to 1720, few of their instruments have come down to us. It is therefore easy to imagine how much excitement this guitar from the first half of the 17th-century might cause. professional musicians, collectors of instruments and objets d’art and European museums will all be in the race, say luthiers Françoise and Daniel Sinier de Ridder, the auction’s experts and consultants. In addition to its rarity, the guitar is perfectly playable, as its table was modified in the 20th century, though it still has its original number of strings (five paired).

The guitar is attributed to Jacob Stadler. While lacking the fame of Antonio Stradivari (1644-1737), who is remembered for his violins but also made harps, zithers, violas, cellos, mandolins and guitars, five of which have survived, Stadler was also an outstanding stringed instrument maker. He was born c. 1585-1590 in Füssen, a small Bavarian town and the cradle of stringed instrument making in Europe. A lute at the Cité de la Musique in Paris—which illustrates the quality and elegance of his craftsmanship—attests that he was in Naples by 1613. The museum also has a guitar from the 1620s. Others, dated 1624 and 1628, are now in public and private collections in London, Marseille, Rome, Vienna, Rome and Leipzig. Only some of them—more guitars than lutes—are dated. Others have not (yet) been authenticated or attributed. A certain Michele Stadler—perhaps Jacob’s son—also worked in Naples and then Rome from the 1630s to 1660.

The Vogue for Marquetry
Luthiers did not start affixing their stamps until the 18th and more particularly the 19th century—if illustrious musicians allowed them to, and if customers did not prefer having their initials inscribed on the instrument. No one knows who commissioned the guitar here. A famous musician? A high-ranking public figure? Nor is it known whether Stadler made more modest instruments—the sort in less precious woods like maple, cypress or yew often found abandoned or broken. In any case, this guitar is more than an instrument; it is a work of art. Sumptuous bone and ebony strips alternate on the sides, neck and table and the marquetry features intricate, lacy patterns of mother-of-pearl and ivory, which in Naples was deemed more precious than bone, unlike in Venice.

Luthiers were allowed to create geometrical patterns of nets, checkerboards, stripes and pistagnes—small black and white rhombuses connected to each other: a French specialty. However, figurative designs, such as pastoral, hunting or musical scenes, were forbidden, and foliage was the exclusive realm of the chessboard and fancy article makers, from whom luthiers—and fan-makers—purchased tortoiseshell, mother-of-pearl, bone, ivory and other precious materials. After 1720, exotic woods—Brazilian rosewood and Cuban mahogany—supplanted marquetry. One detail is important: the guitar here was not, unlike others, modified into the six-course instrument invented simultaneously in Paris and Naples in around 1780-1790. It has ten strings, or more precisely five paired strings (five courses). Contrary to popular belief, they were not made from the guts of cats (whose meowing sounds like a bad musician!) but from those of sheep, goats or kids (young goats). They were washed and wound by the maker himself, who also bought the bones, skin and sinews needed for the glue and the parchment decoration from butchers. Some strings were overspun, i.e. covered in silver, copper, brass or bronze to make them sound better. Around 1770, a Neapolitan string-maker established in Lyon, France, provided metal-wound silk strings. The invention of nylon in the 1930s spelled the end of natural materials.

France and Italy
In Stadler’s day, quality guitars, whether for ceremonial or more lowly purposes, were made in several countries: France, where Louis XIV abandoned the lute for this instrument, thus making it fashionable, as did Jean-Baptiste Lully; Germany; and Italy, which produced flat- and round-backed instruments. In the 18th century, the guitar was French and even Parisian. In the next, Italy, Austria, Germany and England joined in the concert. Musicians and composers traveled from one court to another, their instruments arousing envy or at least curiosity. The six-course guitar was a hit in the Romantic period. In Spain, it was not until Antonio de Torrès (1817-1892) that the instrument crossed the Pyrenees and won over a worldwide audience. "Nothing is more beautiful than a guitar, except perhaps two," said Frederic Chopin.