There are painters who evince little liking for feminine charms—as roundly demonstrated by the fine Rigaud retrospective at the Château de Versailles—and those who beautify their models. And princesses de sang royal (princesses of royal blood) were placed in the top rank of Olympian goddesses by Jean-Marc Nattier. 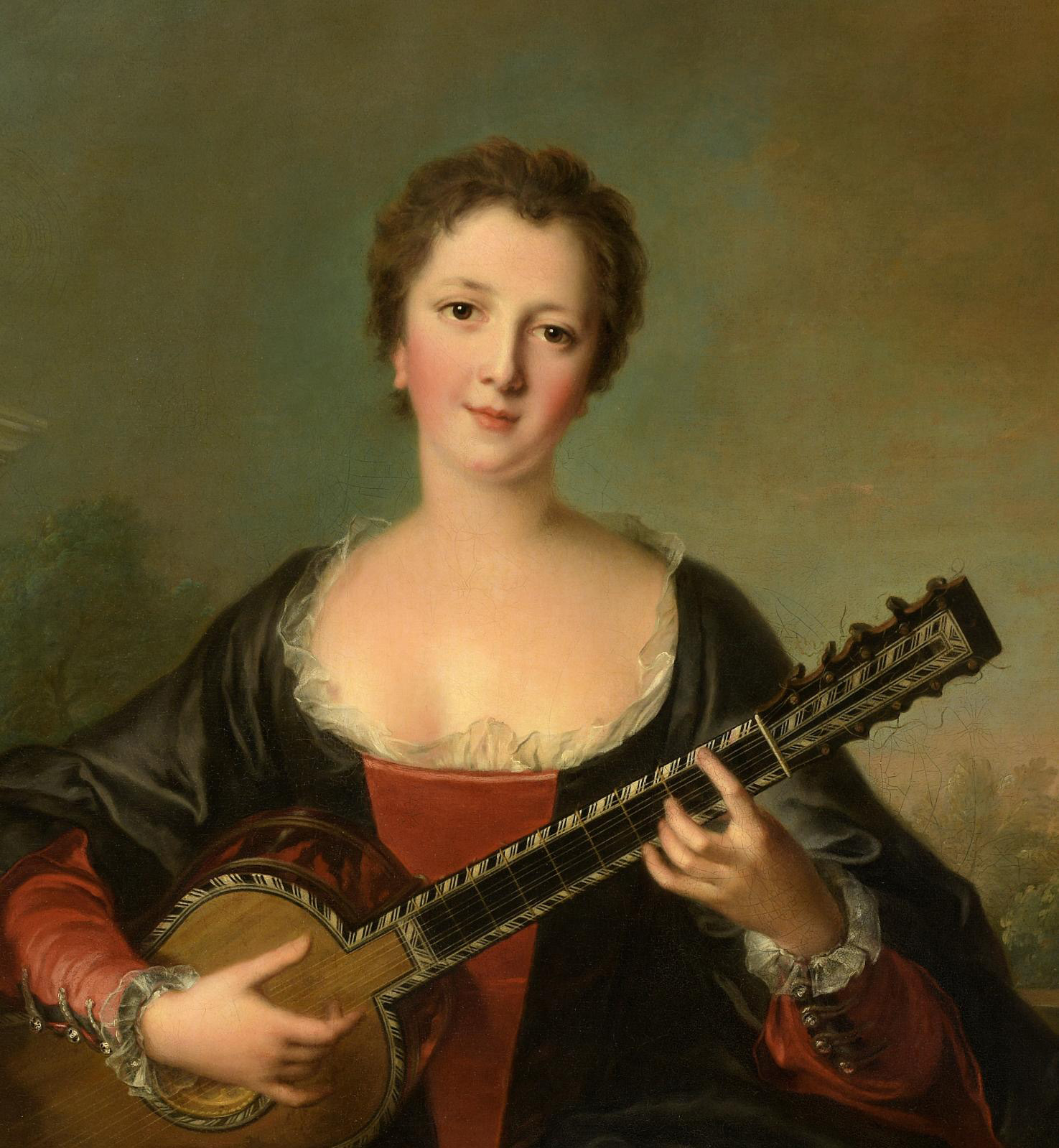 The fleurs-de-lys are both indicative and deceptive. In the 1730s, Jean-Marc Nattier (1685-1766) was the preferred painter for a swarm of French princesses of royal blood. None of the daughters of Louis XIV and Queen Marie Thérèse survived, but the Sun King also had two daughters from his liaison with Madame de Montespan. They were legitimized and married to highly distinguished French princes, and in turn, became mothers to princesses with very similar features. Nattier is reputed to have painted the daughters of Louise-Françoise de Bourbon, known as "Mademoiselle de Nantes", wife of Louis III de Bourbon, Prince de Condé, and Françoise-Marie de Bourbon, known as "the Second Mademoiselle de Blois", wife of Philippe d'Orléans. The granddaughters of Madame de Montespan often seem as alike as two peas in a pod, and this has caused problems for art historians. To complicate matters, the guitarist here, rediscovered by the Daguerre and Turquin Auction Houses, was linked until 1969 with a matching picture of a young girl playing with garlands of flowers prepared by two cupids: a work signed and dated by Nattier in 1731.

The Scandalous Mademoiselle de Charolais?
This guitarist had not reappeared since 1969, but other versions are known. The most interesting one, presented in the 1999 monograph exhibition of the painter at the Château de Versailles, provides a wealth of information. Signed and dated 1731, it has an inscription on the back, which was affixed to the relining canvas when the work belonged to the Duke of Sutherland: "Mad. Lle de Charolais, sister of the/Duc de Bourbon", a highly appealing identification that was also long associated with the portrait here. The scandalous Princess Louise Anne de Bourbon, great-granddaughter of Le Grand Condé through her father, granddaughter of Louis XIV and Madame de Montespan, bore the title of Mademoiselle during the Regency period, a time of countless excesses during which she fell in love with the Duke of Richelieu before becoming (according to the legend much vaunted by the famous French authors, the Goncourts in the 19th century) Louis XV's first partner. The loose morals of the king's cousin had already fueled the flames in the 18th century. Voltaire commented on her penchant for donning a Franciscan monk's habit to meet her lovers: "Brother Angel of Charolais/Tell us by what chance/The cord of St Francis /Has become a girdle for Venus?" Many painters portrayed the outrageous lady in this outfit, but every time, her features were hardly individualized. As Xavier Salmon points out in the catalog of the Versailles exhibition, recognizing her face is a challenge and the curator decided not to go with this identification. Neil Jeffares' very convincing demonstration concerning "Les Portraits des Princesses de Bourbon-Condé par Rosalba Carriera" provides a clearer picture, and again refuses to subscribe to this theory.

Mademoiselle de Beaujolais, born Philippine Elisabeth Charlotte d'Orléans, who was struck down by smallpox at the age of only 19, suffered many disappointments in her life. Cherished by her grandmother, the Princesse Palatine, who praised her beauty, kindness and wit, she left Paris at the age of eight to join the Spanish court, where her father, the Regent, had betrothed her to seven-year-old Don Carlos. Three years later she was sent back to France following the broken engagement between Louis XV and the Infanta of Spain, who took the opposite path. In 1731, the date of the portrait, her former fiancé became Duke of Parma and they hoped to marry at last, but Spain vetoed it because of the sudden cooling of relations with France.

In the 19th century, Gabrielle de Saint-Mars wrote of Mademoiselle de Beaujolais as the most 'pious and virtuous' of the Regent's daughters, 'one of the souls marked for sorrow during their lives and for paradise after their deaths'... and one of the Duc de Richelieu's countless victims. "The reserve that distinguished Mademoiselle de Beaujolais seemed more intriguing to him than the accessibility of others, and it took little more to turn his head and make him dream of an impossible conquest." He employed a thousand secret stratagems to charm her. Upset by the true nature of her beau, she fell ill and died of a wasting disease in 1733. Gabrielle de Saint-Mars' tale is a highly romantic one. The lady's character lent itself to this, especially as sources were rare, unlike all the literature on the excesses of the Regent's other daughters. The most we know is that she was a music lover, which supports the identification of Nattier's painting. After her death, her teacher, Nicolas Chédeville le Cadet, published the second volume of his Amusements champêtres (Countryside Amusements), on which the coat of arms of the young princess appears.

In short, the difficulty of art historians to identify Nattier's model will delight art lovers and the public. They are free to see in this guitarist either a scandalous lady hiding her hand, or a well-behaved Mademoiselle with a certain reserve. Truly great portraitists incite us to imagine all kinds of stories…