Unlike what might be commonly thought, azulejos take their name not from their traditional blue color but from the Arabic al zulaydj, meaning a small enameled polished stone intended to copy ancient mosaics. Portugal gave them a unique artistic and monumental grandeur. 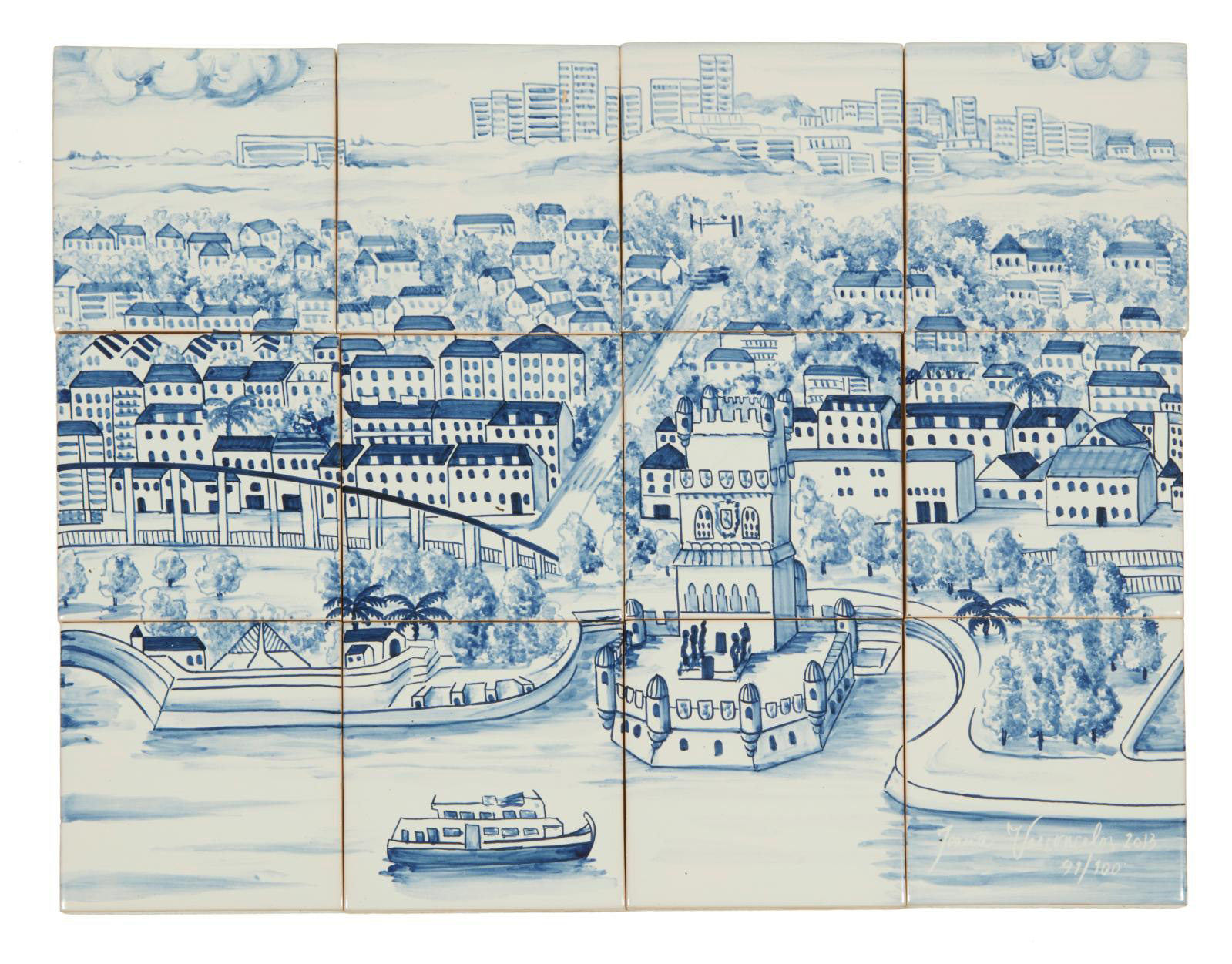 The Iberian peninsula’s earliest azulejos appeared in the architecture of al-Andalus: the alicatados (a mosaic formed of polygonal, colored glazed tiles) at the royal palace of Alcazar in Seville are none other than azulejos that were cut up and assembled into geometric forms. In Portugal, some rare examples of 15th-century Mudéjar art from Seville still grace the Palace of Sintra. King Manuel I (1469–1521) played a key role in this: following Seville’s example, he demanded azulejos for his palace, starting a tradition destined to thrive. first, however, this art form had to shed its burdensome constraints. alicatados were supplanted by the corda seca (“dry rope”) technique, where the design was drawn on fresh clay with a mixture of oil and manganese oxide. Then the colors were applied and retained by thick contours before the piece was fired. In the 15th century, arista (cuenca y arista, “grooves and ridges”) gradually replaced corda seca: a mold was applied to the clay’s surface and the design imprinted on it and its ridges in relief, like cloisonné, keeping the colors from mixing. Large series of patterns could be accurately reproduced in this way. Before the 16th century and the hegemony of the square, azulejos came in all shapes and sizes. The designs stretched out over several tiles, from the smallest, two by two, to the largest, six by six or twelve by twelve.

Azulejos featured only rigorous geometric forms until about 1500, when painter Francisco Niculoso (c. 1470–1529), known as Niculoso Pisano, introduced Spanish artists to majolica. Soon Iberian artists were treating azulejos like canvases. A new gracefulness and a palette of colors capable of expressing various artistic currents enhanced Arabesque patterns. Grotesques became fashionable, with pagan figures being attributed to Christian characters in a unique style called brutesco unknown anywhere else in Europe. This was just the start of decorative elegance: marvelous azulejos de tapete or carpet compositions appeared in the late 16th century and became highly popular in the first half of the 17th. They drew from a rich, detailed ornamental repertoire deeply permeated by the ties between Portugal, the Orient and the Extreme Orient. Azulejos featuring clover or floral patterns or ornamentation from far-flung places covered entire walls of churches and cloisters like heavy tapestries, brocades or delicate silks. Some of the lavish designs featured prim and pious images.

In 17th-century Europe, glazed blue and white earthenware tiles from Holland, cheaper than the delicate Chinese porcelain they sought to imitate, met with considerable success everywhere. Late in the century, huge compositions were exclusively Portuguese, but in the following one, Portuguese artists decorated palaces, churches and wealthy homes with azulejos based on French engravings and Flemish bouquets and no longer hesitated to sign their works. António de Oliveira Bernardes (1686/1687-1732), his son Policarpo, Manuel Dos Santos and one who signed with the monogram PMP were among the great artists who supplied both Portugal and Brazil with tiles. Even more surprising, figuras de convite—life-sized figures whose cut followed the silhouette—were unique to Portugal. Placed on walls, they welcome visitors with a gesture or a phylactery, a friendly look and clothing richly embroidered with yellow. In about 1740, azulejos became colorful again, first in muted yellow, green and purple tones, before the 1755 earthquake marked a break. A humbled Lisbon eschewed bold patterns and bright colors. Pious azulejos, primarily depicting São Francisco de Borja, São Marçal and the Virgin, comforted the Portuguese. A neo-classical style featuring manganese blue and violet timidly emerged at the end of the century.

The Lusitianism of Azulejos
Meanwhile, on the other side of the Atlantic, Brazilians were tiling their façades with azulejos for their protective and insulating properties. Embracing the new taste in houses decorated inside and out, they annoyed their compatriots for a while by reproducing in Portugal what they had done in Brazil. It paid off: new factories sprang up, like the royal factory of Louça founded in 1767, and adopted semi-industrial production methods able to supply the whole country with tiles beautifully decorated with rosettes, geometric patterns and even reliefs. Now affordable for all, azulejos adorned public places, markets and small shops in the 19th and 20th centuries. In the 1950s, a breath of fresh air blew through Portuguese art. Maria Keil, Maria Helena Vieira da Silva, Eduardo Nery and, more recently, Ivan Chermayeff at Lisbon’s Oceanarium, embraced this rich, traditional medium and vigorously swept the cobwebs away.

Worth Knowing
The azulejo collection at the Château de La Mercerie in Charente, France and the National Azulejo Museum in Lisbon

T is for Tapestry

In the late Middle Ages, tapestry production, whose origins lay…