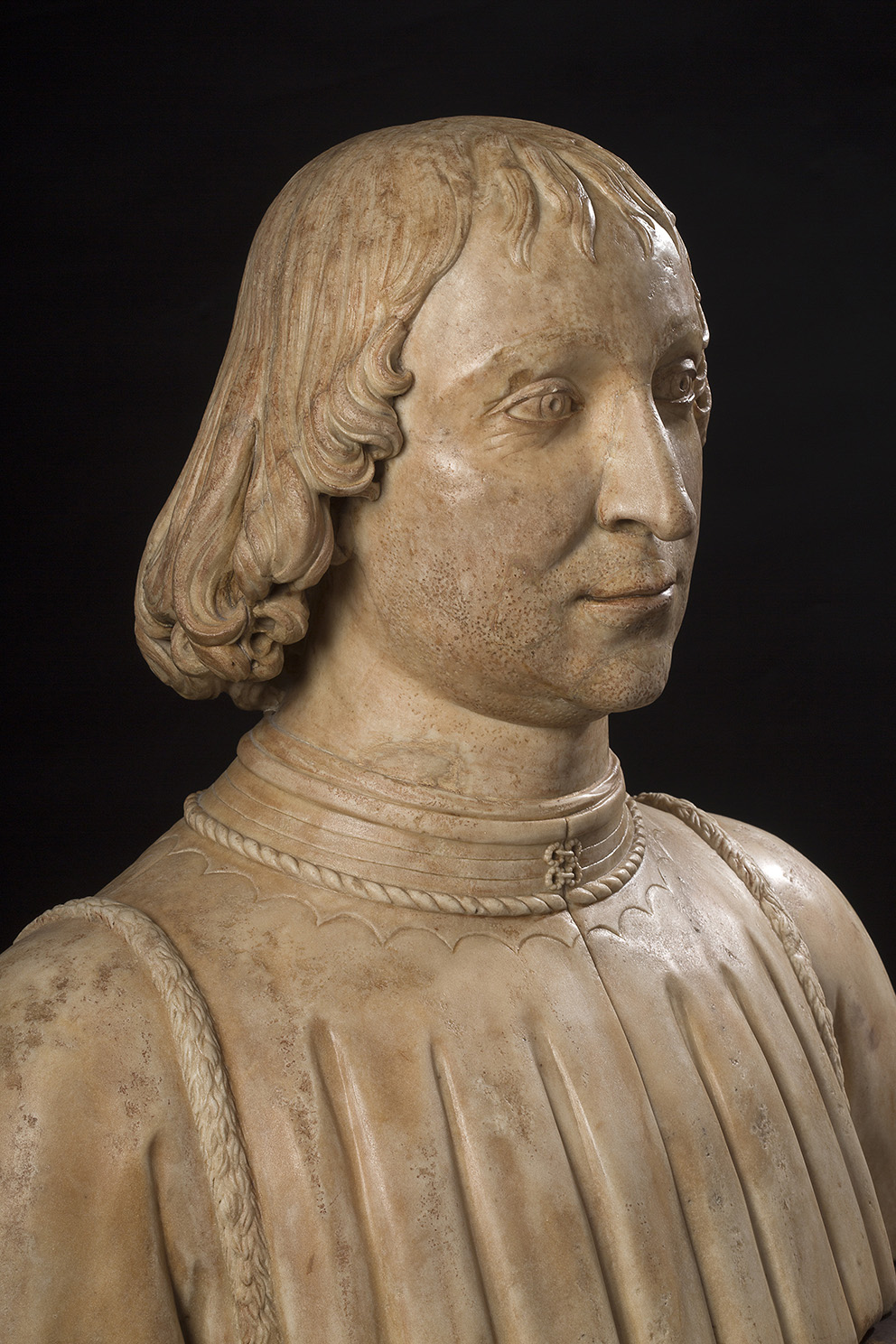 Beneath the Gaze of the Medici
The naturalistic and humanist movement that arose in Italy in the late 14th century encouraged the return of the portrait. This developed naturally under the impetus of patrons, and flourished particularly in Florence, the country's richest and most politically advanced city, with the largest population. Just around the time of Cecco di Pietro's death, the competition launched in 1401 for sculptors to decorate the doors of the Baptistery is often considered the starting point of the Renaissance. Employed by Vasari, the term rinascita emphasised the new direction taken in the first half of the 15th century, driven by a desire to revive the golden age of Antiquity, outdoing Roman models and the perfection of the Greeks. In the second half of the 15th century, Mino da Fiesole took up the challenge. He was introduced to the Medici court by Michelozzo. He immortalised Piero the Gouty (son of Cosimo, the dynasty's founder), his wife Lucrezia Tornabuoni and his brother Giovanni in busts that are in the Bargello Museum in Florence and the Camposanto in Pisa. Making its debut at auction, a marble portrait of Giuliano de' Medici, assassinated during the Pazzi conspiracy, is attributed to him (€180,000/220,000). The sculptor would have executed it shortly before leaving for Rome in 1474. This is in the "Florentine" style, i.e. the figure goes down to the sternum. The sculptor sought to depict the personality of his model through a highly naturalistic representation: the concentrated gaze and the lines around the eyes, as well as the tight jaw, evoke a powerful man full of authority. But far from being reserved for princes, the fashion for portraits glorifying the individual extended to all classes in society. For example, Antonio Rossellino sculpted one of Chellini, Donatello's doctor, and Benedetto da Maiano one of the merchant Pietro Mellini, both reworked from moulds taken from life designed to reinforce the naturalism of the subjects' expressions.

Giambologna's Serpentine Line
Florence went into a decline in the 1490s after the death of Lorenzo the Magnificent and the Savonarola saga, and new centres of creation emerged, particularly Rome and Venice. In this way the Renaissance gained ground, reaching its peak in the first third of the 16th century. But Florence retained its magnetic attraction. After spending some time in Rome, in 1555 a Flemish sculptor from Douai decided to move to the city, where he could admire the work of Michelangelo. This was Jehan Boulongne, better known as Jean Boulogne. His name was Italianised as Giovanni Bologna, and soon contracted to Giambologna. He, too, enjoyed the protection of the Medici, becoming the most famous exponent of Mannerism. His style was soon familiar throughout Europe, thanks to reductions of his works made by members of his studio, Antonio Susini, Pietro Tacca and Pietro Francavilla. These statuettes were often presented as diplomatic gifts. One of them, on offer at €500,000/800,000, could have been produced for Anton Maria Salviati, who came from a family of bankers connected with the Medici, as suggested by an inscription on the underside. A skilled founder, Susini was involved in the production of this piece in c. 1596. Only a very few others are listed. This bronze, 34 centimetres high, is a reproduction of a life-size marble allegory of Architecture, commissioned in c. 1565 for the Boboli Gardens and now in the Bargello Museum in Florence. Her idealised features are those of a young woman. She holds the attributes of the art she embodies: a ruler and a pair of compasses: perfect for measuring the success of Giambologna's works, as highly sought-after today as they were in his own time.