A Dream of Porcelain

The Porcelain Room of the Santos Palace in Lisbon is famous for its ceiling, laid out at the end of the 18th century with "blue and white" plates from China. The Musée Guimet is presenting a 3-D reconstruction. 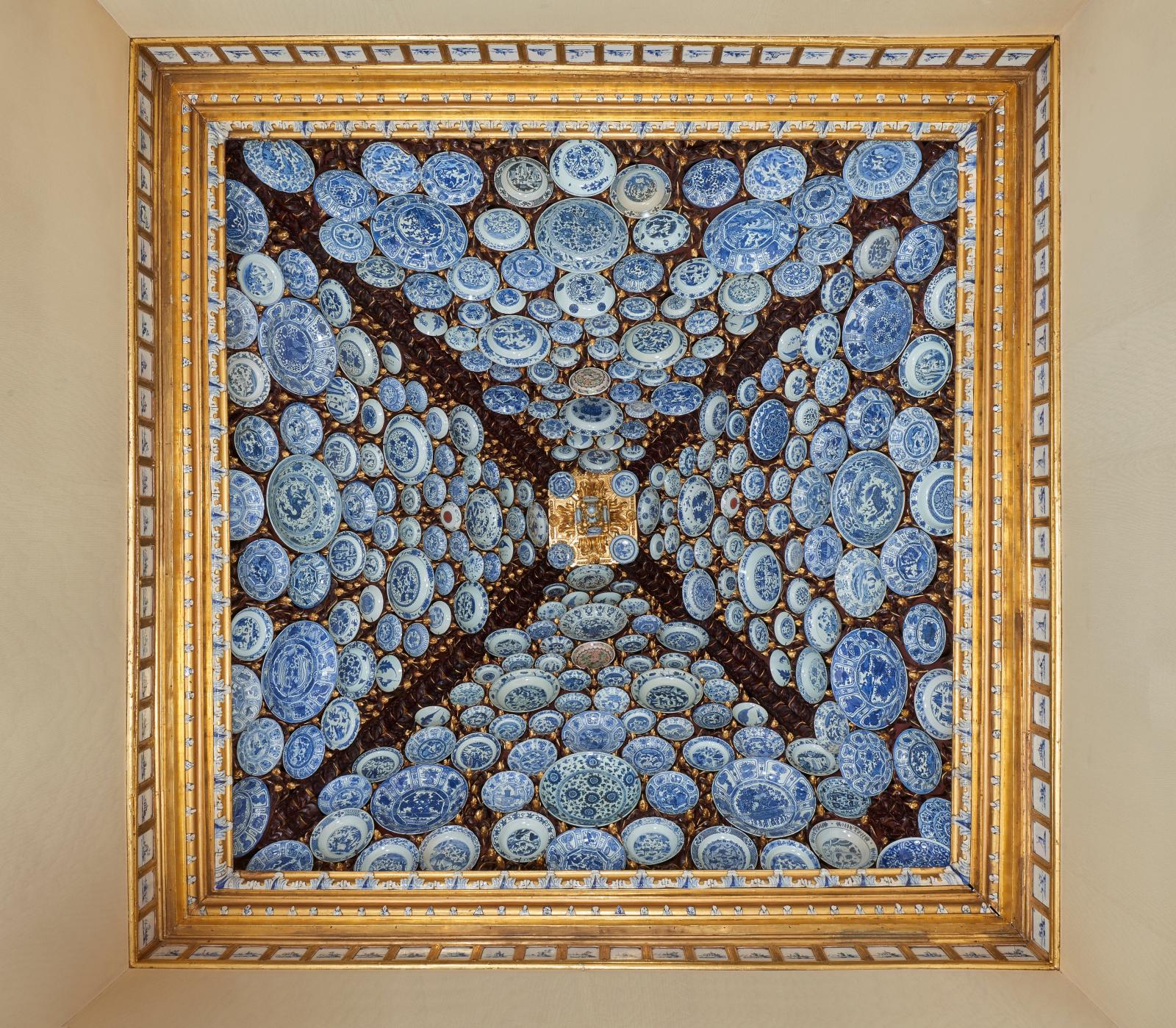 Standing above the Tagus estuary, the Santos Palace (now the French Embassy in Portugal) looks out over a distant panoramic view far beyond the port. Before it was bought by the French government in 1909, the building belonged for several centuries to the Lancastre family, whose device, a swan feeding its young, can still be seen above the main entrance gate. The decoration of the palace owes much to this high nobility. It features paintings inspired by Raphael's Loggias in the Vatican, set off by Neoclassical mythological themes taken from Virgil and Ovid, and, most impressively, a collection of "blue and white" Chinese porcelains, mainly dating from the Ming dynasty (1368-1644). These 261 plates of different shapes and sizes were fixed to the ceiling during the 16th and 17th centuries by the palace's successive owners. Only Ambras Castle in the Tyrol has a comparable European collection of pieces that have stayed in situ since that period, although the one there is far smaller, with at most thirty porcelains remaining. So in terms of quantity and quality, the diversity of the Lisbon plate collection is unique in Europe. The oldest go back to the times of Manuel I. During his reign (1495-1521), Pedro Álvares Cabral explored the coasts of Brazil, and Alfonso de Albuquerque controlled the route to India. At his instigation, Europe began exploring and trading with China. This established the first milestones of an imperial conquest, and with it a whole area of the world economy changed dramatically. Until then, Arab sailors would meet Chinese junks at Malacca in Malaysia, take over their cargoes of porcelain and transport them to the shores of the Persian Gulf and the Red Sea. Genoese and Venetian merchants then imported a minute proportion to the Mediterranean, while Ottoman sultans and Persian sovereigns amassed fabulous collections. The latter survive to this day in Topkapi Palace in Istanbul and the National Museum of Iran in Teheran, which contains pieces from the tomb in Ardabil.

Globalisation already at work
Most of the Ardabil porcelains date from the reign of Zhengde (1506-1521) onwards, and were brought together in 1611 by Shah Abbas the Great of the Safavid dynasty. These have the greatest stylistic affinities with those of the Santos Palace. For the Near East, they are the last surviving evidence of a "global but segmented trade," to quote Sophie Makariou, president of the Musée National des Arts Asiatiques-Guimet. "Everything changed when the Portuguese, under Vasco de Gama, sailed round Africa via the Cape of Good Hope, and reached the Indian Ocean. In 1511, they seized Malacca, thus ensuring a rendez-vous point with Chinese ships. With its lacquer, porcelain and silk, China was the world's leading exporter of luxury products until the 18th century. However, there was now only one operator controlling the entire global circuit and its trade. This operator was first and foremost Portuguese." The geopolitical advantage brought by the history of these maritime silk routes was obvious, but there was also another aspect, to do with the history of material and technical exchanges. They made it possible to produce porcelain painted in blue beneath a colourless glaze. The combination of kaolin, a white clay, with a mineral called cobalt imported from Persia was invented in Jingdezhen (Jiangxi province) in around 1320-1330. "Two worlds were thus connected," says Sophie Makariou. Under the aegis of the Genghisid dynasties of China (the Yuan, 1279-1368) and Persia (the Ilkhanids, 1256-1335), trade in "blue and white" started up on a global scale. The Santos collection also reflects the history of these influences, and with it, that of a globalisation with widely differing goals. In this context, Portugal's University of Coimbra played its part. This was the main training centre for Jesuit missionaries, who set out to convert the easternmost regions of Asia. They returned with tales of China and its aesthetic and scholarly refinement, and through them the taste spread throughout Europe. This advancing globalisation also involved international capitalism and the first trading posts, fought over by the great maritime powers of the time. After Portugal, it was the turn of Spain, Holland, Great Britain, and to a lesser extent, France. All these powers engaged in a merciless trade war. They each contributed their share of exoticism, too. An imaginative world from elsewhere began to surreptitiously influence the taste of European painters and craftsmen. Despite the distinctly obscure meaning of the motifs ornamenting these porcelains imported for a fortune, the potters of Lisbon's freguesia of Santos-o-Velho (the Santos Palace district) were inspired by them from 1572 onwards, consolidating the general love of China shared by Europe and its elite classes.

Dreamlike compositions
The French Embassy porcelains are particularly remarkable for the wealth of details borrowed from Daoist mythology.  They feature Xiwangmu, Queen Mother of the West, holding sway on the Kunlun Mountains. She holds the ruyi sceptre, the insignia of dignity, which grants wishes. Many of the large plates are decorated with landscapes, featuring pines and lingzhi (sacred mushrooms), all symbolising longevity. In places phoenixes are seen flying two by two in opposite directions among lotus blooms. Some of these motifs date from a far more distant period, that of the Song dynasty (960-1279), and sometimes further back still. One of these is Feiyu, the sea dragon; others are deer, fish, birds and all manifestations of nature like trees, flowers and fruit surrounded by waves and clouds. In a study published in 1984 by the Arts asiatiques review, sinologist Daisy Lion-Goldschmidt had already pointed out the "skilfully decorative rhythm" of these pieces with their dreamlike compositions. One plate emphasises the sense of space created by setting a highly dynamic foreground of countryside against a barely delineated background stretching to infinity; another shows one of the hybrids from the Chinese bestiary of fabulous beasts. Its body emitting flames, it dominates the foamy waves with open mouth, poised to seize the jewel it is pursuing: an uncanny presence that seems to be held back by foliage culminating in peony blooms. Thanks to financial support from the Quai d’Orsay, each of the porcelains was photographed after the period needed for their restoration. "This photographic inventory has joined the Grandidier digital database (named after one of France's leading late 19th-century porcelain collectors – Ed.)" says Sophie Makariou. The scientific aspect of this operation will also be covered in various publications. The event will enable us to "understand a global commercial and aesthetic phenomenon more fully, including, in a more fundamental way, how it was received" in both eastern and western Eurasia”, says the museum directory happily.