You never know what awaits you in an "Œuvres Choisies" exhibition, the collectively organized shows of objects that most excite dealers in their upcoming sales. What immediately stands out in the current sampling, on view through March 4th, is its concentration of animal imagery. 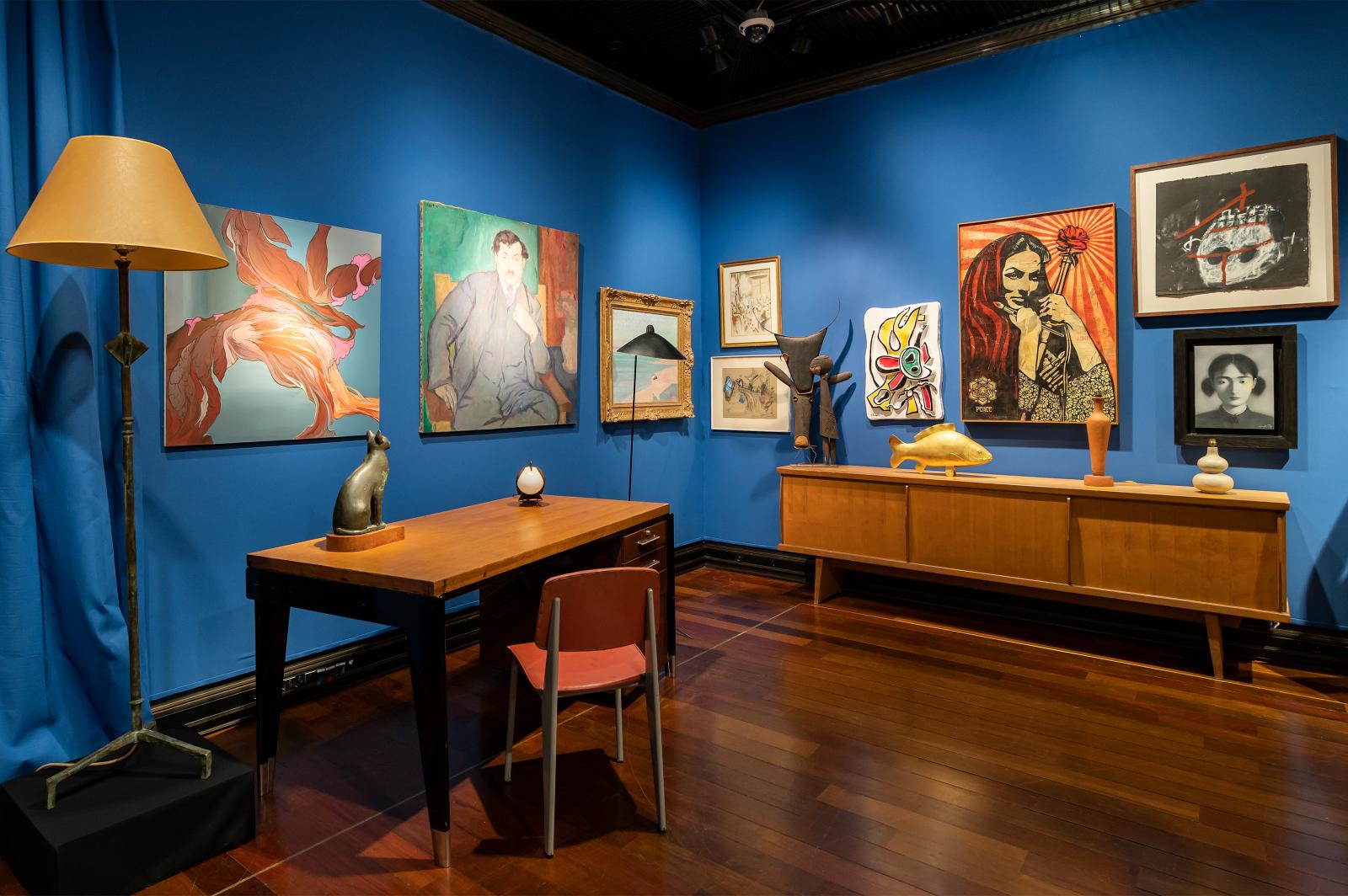 Gallery 9 of the Hôtel Drouot has been transformed into a veritable menagerie with sculptures, objets d’art, and paintings that all feature animals. Ranging from ancient to modern times and from across the globe, these pieces are complemented by the usual rich offering of modernist design,18th-century silver and furniture, old master painting, and even prominent ‘street artists.’

The most impressive animal form is most certainly the 1971 Large Duck ‘valet’ by Francois-Xavier Lalanne in welded, oxidized sheet metal. The fanciful work of the Lalannes is a staple of the contemporary art market, but this custom piece stands out for its size: nearly four feet in height and over six feet long. The wings and head open on to the hollow body, but despite Lalanne’s blurring of the line between art and utility, it is difficult to imagine casually tossing one’s coat into such an imposing object.

Decidedly less ludic, a bronze votive statue of Bastet, scientifically dated to 664 -332 BCE, presents the goddess with all the reverence that ancient Egyptians offered their felines. Bastet was honored by annual festivals of ritual drunkenness to commemorate her transformation from the uncontrollable lioness Sekhmet into the docile guardian of the household and childbirth. Such mass disorder is difficult to square with the regal self-possession of this object’s erect posture, ears pierced to received golden hoops, and tail curled demurely at its side.

A white marble Lamb remains a singular object within the European sculptural tradition, rendering it difficult to date. Its clear precedent in naturalistic Roman animal sculpture as well as its surface wear, possibly from devotional use, suggest it was created between the 14th and 16th centuries. The discrete inclusion of a pomegranate securely links it to the Renaissance melding of classical aesthetics and Christian revelation.

The reduced-scale edition of Francois Pompon’s 1929 bronze Large Stag exemplifies the sculptor’s transposition of animals sketched at the Paris zoo to his three-dimensional exploration of simplified volumes and surface luminosity. A 1927 ink-on-trace working drawing entitled Black Panther With Flattened Ears, also included in the exhibition, demonstrates that gradual purification of form. The darkened outline of the right hind leg indicates a rounded edge ceding to the empty space beneath the animal’s trunk. That effect is reversed in the Stag. The edges of the sculpture’s volumes are purposefully lighter than its general surface patination, which highlights the geometries Pompon assembled to capture the power of an animal he described as ‘king of the forest.’

Other delightful animals in the exhibition include two porcelainized stoneware falcons from late 18th-century Edo. Their dull brown surface is offset by piercing glass eyes as well as gilded Rococo bases that suggest the pride of place they once held in a European collection of japonerie. An exceptional ‘elephant clock’ by Jean-Baptiste Baillon, clockmaker to the French and Spanish courts, similarly derives from 18th-century Europe’s fascination with East Asian objets d’art. The clock, topped by a playful monkey with parasol, responded to consumer demand by adopting the form of popular porcelain elephants to house the workings and face.  While not an animal per se, a spider web is cleverly hidden amidst the proliferation of flowers that crowd a small oil panel of Vertumnus and Pomona attributed to the workshop of Abraham Govaerts. Perhaps an indication of the trap the god has set for the nymph, spotting the web offers a playful goal to the ever-closer examination invited by the painting’s abundant detail.

As usual, a wide range of painting and sculpture from old masters to rising stars is on offer. One of the most significant pieces is a 1918 canvas from Alberto Magnelli’s Lyrical Explosion series, which was purchased directly from the artist at the Venice Biennale by the family of the current owner. Magnelli was a vector of exchange between Futurism and the Parisian avant-garde. He frequented Picasso, Léger and Archipenko during a 1914 trip to Paris that was cut short by World War I. Once returned to Italy, those combined influences erupted in the Lyrical Explosions. While the paintings are clearly indebted to the melding of figure and ground in the geometricized cubist nude, the series pushes further into abstraction with its splayed arcs of color that are suggestive of the Delaunays.

The nineteenth-century is represented by a pencil study by Degas of a particularly complex folding of the hands for a female portrait. The drawing has an extensive exhibition history, documented by an unusual number of transport tickets on its back. A small, oil sketch of 1880 entitled Young Horseman Straddling His Mount captures the precocious talent of a sixteen-year-old Toulouse-Lautrec. The pointed juxtaposition of the horse’s mass with the boy’s slender frame can’t help but to suggest the artist’s acute awareness of the challenges of navigating the world as a little person.

Wang Keping’s 1990 wood sculpture Character offers an intentional melding of the human and the natural in which the particularities of the material guide the artist. A founding member of the Xing-Xing movement (The Stars), in 1979 Keping joined other young artists in announcing their rejection of Socialist Realism with a guerilla exhibition hung on the fence of the National Museum of China. His call for an art of individual expression echoed that of the early 20th-century Chinese avant-garde. It also led to Keping’s exile to Paris, where he lives and works to this day. Character emerges from a twisting tree trunk, with the Keping’s alterations camouflaged by his common practice of painting the entire work black.

The 2009 canvas Magma by Julie Curtiss, who catapulted to the top of the art market with a major sale in 2019, presages her more explicit, figural explorations of the convergence of nature and culture in notions of the feminine. Reminiscent of Hans Bellmer, Magma captures the unfurling and merging of organic forms that appear to be both vegetal and visceral. Set against a stubbornly neutral background, flowing tendrils of varied warm browns are unsettlingly punctuated by an insistent bodily pink.

Street Art is also represented. An Albinos Model Invasion Kit of 2001 by Invader is representative of the crossover from guerilla installation to the gallery. Signed and numbered, the work is ready to be installed wherever the owner dares, if the owner dares to compromise the value of their purchase by destroying the intact packaging!  A 2007 collage and aerosol on canvas by Shepard Fairey entitled Revolutionary Woman With Brush echoes the artist’s own politically engaged creative practice.

While museums (and zoos!) remain closed during the ongoing health crisis, the Hôtel Drouot welcomes visitors Tuesday through Friday.

A Panther by the Immaculate Pompon